This interview originally ran in October of 2010. The White Assassin, the follow up to Nightshade City, was published in 2011. To win an advanced reader copy of Nightshade City leave a comment on this post. 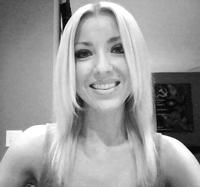 This week we get to peek at the creative space of debut author Hilary Wagner. Her first middle grade novel, Nightshade City, was published this month.

Nightshade City is about an underground kingdom of rats where three orphan rats band together to overthrow an oppressive ruler. No less than author Rick Riordan (Percy Jackson and the Olympians series) recommended the novel saying, “Fans of Redwall and the Warrior series will love this heroic tale of good versus evil in a subterranean society of rats. The world of the Catacombs is so compelling readers will wonder if it really might exist under our city streets.”

To learn more about Nightshade City you can visit the book’s website where you can view the trailer, read reviews, and learn some cool rat facts. (I was fascinated to learn that rats can learn their names and will come when called, and that they have belly buttons!)

In addition to writing, Hilary is also a talented painter. (I believe the piece on her wall is one of her own.) She has a degree in fine art and her paintings have appeared in numerous galleries and exhibitions in the Chicago area, where she lives with her family.

And now let’s learn a little about Hilary and where and how she writes: 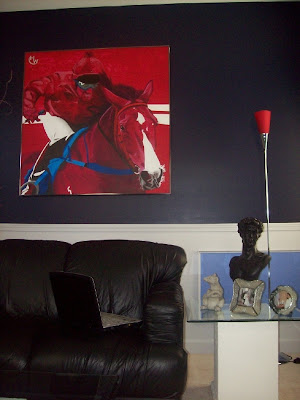 I write on my favorite couch in the family room, nice and cozy in the corner. This room always seems to give me inspiration. It lets just enough natural light in and has all my favorite colors. Note the glaringly red painting on the wall! ;)

A workday with me is never typical! I have family, which includes two small children, a job, and a neurotic dog, who always seems to need to go outside when I’m at a pinnacle point in my writing! 😉

1. I love my Acer laptop, sounds silly, but it’s my baby! I can’t imagine having to replace it.
2. My statue guy–David. He’s thoughtful, quiet and digs all my ideas!
3. My stone rat, Juniper. My daughter named him after one of Nightshade City‘s main characters. He’s the one on the cover. 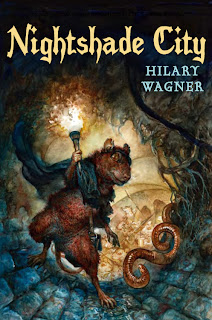 The only ritual I can think of is emailing myself my MS, even if I only add one paragraph! I’m always worried about losing data, even with a zip drive because I had one fail before, but luckily I could retrieve everything from email. Email is the poor man’s (or in my case, the lazy woman’s) zip drive!

I usually keep the TV on very, very low–just audible. I like to have a little background noise or my mind will only concentrate on the silence. Many times, I have my 2 and 7 year old playing in the background, who frequently mimic stampeding elephants, so you can imagine how deafening pure silence would be!

I’m a coffee snob! I have one of those amazing grind and brew pots. I’ve got to have fresh coffee–sad I know, but I like to blame Starbucks. They’ve totally spoiled me. In the afternoon, Diet Pepsi Max is my main man, I’m slightly addicted! I only have one though or I get way too cold!

Gosh, I suppose the pure drive to create! If only I had the same focus when it came to housework, my husband would be so thrilled! ;)

Usually on my laptop, though late at night, I’ve been known to write an entire scene longhand and then add it to the MS in the next day.

I don’t outline, in fact I’m not quite sure what an outline is. Ha, ha! I guess the best way to describe my technique is “scene building”. I let one scene build onto the next and the best way for me to create those scenes is through research. It really opens up my mind, especially when I’m stuck. Research is my solution to writer’s block–always seems to spark an idea. I always picture a story like a house, something you build brick by brick.

Someone who doesn’t talk a lot! 😉 Seriously though, I’d love to work alongside Rick Riordan. I would think he does a lot of research for his novels and would love to see how he keeps it all organized, though I think he would be far from impressed in regards to my note taking, unless he’s a major fan of random scribbled on paper scraps and old envelopes scattered about the house!

As writers, it’s hard not to let noise from the outside world have an effect on your writing. Whether you are on the hunt for an agent or your first book has just released and you’re worried about sales, you have to take a step back, breathe, and write. My agent and I had a long talk about this at one point and it’s really helped me. At some point you have to realize you’re doing this because you love writing and that love has to be your main focus.