I’m visiting my parents in the Bay Area and my trip fortunately coincided with an appearance by Shannon Hale and Libba Bray in San Francisco through the Not Your Mother’s Book Club. Yay! Their tour won’t be going to Colorado so I was super excited to get the chance to see them. Most especially Ms. Hale. I love, love, love The Princess Academy. Such a great book. I bought her latest one too, but I haven’t had the chance to read it yet although I’ve heard many good things.

My mom went with me to the reading and we had a fun day in the city. I was a little uncertain if this event would be adult-friendly. The book club is definitely targeted at teens (and these are popular young adult authors after all). I didn’t want to walk in and have all these teenagers sneer at me and say, “Ewww. . . who is that old person crashing our party?” But no need to worry. It was teen dominated and adult friendly, which is the best combo I think.

My mom and I were waiting outside the cafe where the event was being held when I saw my friend Rachel walking up the sidewalk. I had hoped I might run into some of my old Bay Area writing friends at the event, but I had been so busy before I flew out, I never got in touch with anyone about the reading. I was super happy to see Rachel, but not so surprised because she was one of the first people who came to mind that might attend. But she was pretty stunned to see me, since I was supposed to be over a mountain range and far, far, away.

The event would have been very nice if Rachel hadn’t been there, but with her there it was SO MUCH FUN. The organizers did a great job and if you live in the Bay Area and are a fan of YA, I highly recommend you attend future NYMBC events. I don’t know how much each event varies, but this one was very laid back. The cafe was closed for the event so it was just us fans there, which was nice. There were drinks and food and the event began with everyone snacking and making small talk while Shannon and Libba circulated through the crowd. They were great. Shannon even sat on the couch with Rachel and me, and we all talked writing for a few minutes. I don’t remember much of what was said because what was running through my brain was “So cool! I’m sitting on a couch chit-chatting with a Newbery Honoree!” But I can assure you that not only is she a talented writer, Shannon is as nice as I imagined her to be. (Which is really nice.) What I didn’t think about her being is funny, but she is. She just seems like the kind of gal I’d bake a batch of brownies with and sit around the kitchen table gossiping and giggling over ridiculous things. I don’t bake brownies often, but if Shannon and I hung out that’s what I imagine us doing. Hopefully we’d also exercise together because those brownies would go straight to my hips.

Anyway, after Shannon and Libba circulated, they stood up front and talked to the crowd. They were very funny and I would have sworn they’d been old college roommates and had known each other for a decade, but I guess they’d met for the first time only a day or two before. Talk about natural chemistry. They called themselves the Torso Twins because their book covers both feature the torso of a girl. They did a Q/A session with one another where they asked each other increasingly ridiculous questions along the lines of “If there was a sock puppet musical of your life, what would the theme song be?” They told silly stories and were all around entertaining. They ended their Q/A session by bringing up a couple people from the crowd to be backup dancers and sang “Total Eclipse of the Heart.” (I don’t remember what led to that, but it seemed like a natural progression at the time and was quite funny.) Afterward they answered questions from people in the audience and then signed books. NYMBC gave out goody bags for every attendee that were a mix of promotional items for various books and two advanced reader copies of books soon to be released, which I thought was very cool. A very enjoyable evening all around.

Here is a photo of Rachel (left) and me (right) with Shannon Hale. In the very bottom left you can see Libba Bray’s neck and jawline: 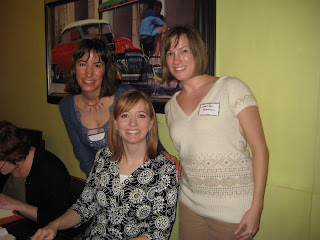