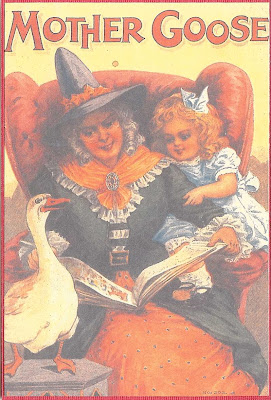 In which I cover three book- and/or writing-related things that have been keeping me busy since I last posted.

Part Three: Friends recently welcomed their first baby and in celebration I co-hosted a shower for them. The theme: Build Baby’s Library. The mom-to-be had made a comment many months ago that she thought one of the best gifts you can give to expecting parents are books for the baby. And of course, me being a book lover, I made a mental note of that comment. The theme worked well too, I think, because this was the last of three showers that were thrown for them so they had already received many of the baby necessities.

There’s so much you could do with this theme, don’t you think? Ours was a very casual affair held at my friend the co-host’s home. The expecting couple was showered with books as gifts, of course. I made invitations using a vintage Mother Goose postcard. I glued a copy of the postcard to cardstock and printed the party info on back along with urls for Indie Bound, to encourage shopping at local independents, and Vintage Children’s Books, for finding copies of old favorites. Very simple to make and it only took me a few hours to print, cut, and assemble everything. The cake was actually cupcakes decorated and arranged to look like Eric Carle’s Very Hungry Caterpillar. We initially planned to make the cupcake caterpillar ourselves—and I do think it would be a fairly easy do-it-yourself project—but we wussed out and ended up taking a picture to Target, where they do cupcake-cake creations of pretty much anything you’d like. I didn’t think to take a picture of our cupcake caterpillar (it turned out really well though), but here’s a cute version made by a professional baker I found online: 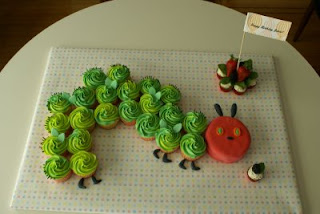 Speaking of the The Very Hungry Caterpillar, did you know that the book recently celebrated its 40th anniversary? 40 years! That’s amazing for a picture book to stay in print that long. To create something that has remained relevant and popular for 40 years would be incredibly gratifying. The Eric Carle Museum of Picture Book Art in Massachusetts has been high on my list of places I’d like to go for years now. I’d love to take a road trip with my husband along the east coast and make that one of our stops. Also, did you know that Eric Carle keeps a blog?

Here is a video of Eric Carle talking about creating The Very Hungry Caterpillar (which was originally about Willi the Worm, a worm who ate too much. Isn’t that funny? Good call in changing it to a caterpillar.)

7 Responses to “Catching Up: A Three-Part Series”