Roberta Collier-Morales (aka Bobbi) started her illustration career while living in New York City where she was privileged to study the art of illustrating children’s books with Robert Quackenbush, Simon Dinnerstein, and got sage advice from Leo and Diane Dillon. She took classes with various master teachers at The Graphic Artists Guild, Parsons New School, and the The School of Visual Arts in New York City. Living in New York City helped her hone her craft and learn about the business of publishing. In 1980, she signed with her first agent–she’s now with her fifth agent and couldn’t be happier.

She’s done work for the educational, mass market, religious, and trade book markets for over 30 years. Her participation in SCBWI, both in New York and Colorado, has been one of the best networking and professional aids in her career, and has been a tremendous influence on her craft.

For the past five years, she has taken steps to license her work and participated in the Surtex Show, International Licensing, and the Craft and Hobby Association trade shows. She designs fabrics for Andover Fabrics in New York and continues refining her various collections for licensing. The field of illustration has changed considerably in the past seven years, but her lifelong dream is to write and illustrate her own picture books.

An extended version of this interview appeared in the Fall 2009 issue of Kite Tales which can be downloaded on the RMC-SCBWI website. I have attempted getting in touch with Bobbi for permission to post samples of her illustrations, outside of what you see in these office photos, but haven’t had luck connecting with her yet. If I hear back and get permission, I’ll update this post with some samples of her work. In the meantime, head on over to her website to check it out!

Work starts around nine in the morning with organizing the various projects I’m working on and starting with the project that is due first. When I don’t have paying freelance work, my time is used to create new collections for licensing, work on story ideas and illustrations, or work on art that is unfinished. My time without jobs is used to build new portfolio pieces or projects that I hope to get work with later. Sooner than later is better! 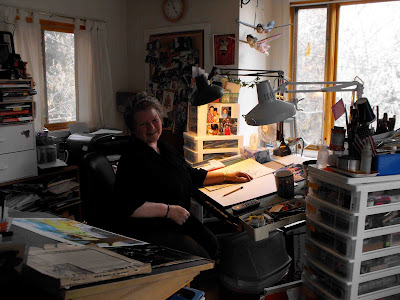 My computer, desk, and books–as I mentioned earlier. Having a spot where I work every day, set up and organized to help me create art in the most optimal way is really important.

Do you have any rituals? If so, describe them.

When I’m stuck, I clean. It’s kind of a joke, but it changes my stuck energy and helps me think. I also go on walks–getting outside and seeing the trees, sky, mountains, and beauty that’s around me, helps me get into a different mindset. 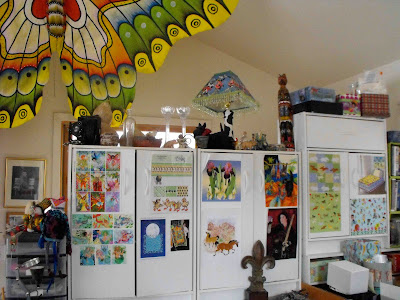 Unlike all those people who say they never watch television, I love to listen to the History channel, HGTV, and interview shows as well as watching old movies. I tend to listen to books on tape, or classical or new age music when I want music rather than words.

Coffee or water. Popcorn or strawberries with yogurt! Yum–that’s when I’m being good, I won’t mention all the other favorites that I’d RATHER eat!

Deadlines–either real or my own. Projects that I’m in love with. I don’t have trouble staying focused, I have trouble getting back into the “real world” after a day of being so focused that I barely know what time it is. 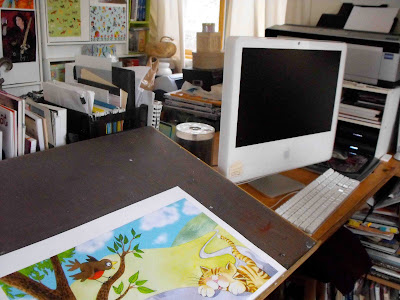 My daughter and son–we inspire one another.

What is the best piece of advice you’ve heard or received?

An art director once said to me “if you have to explain it, it doesn’t work.” As an illustrator, I have to make sure my work tells the story I intend the viewer to understand.