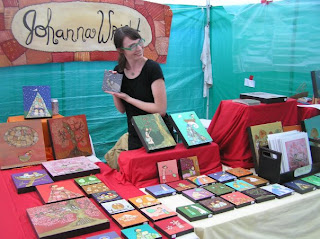 I was first introduced to Johanna Wright’s art through Laini Taylor’s blog and subsequently found Johanna’s Etsy store where I became completely enamored with her artwork. Her paintings are often saturated with warmth, even when she uses cool tones, and depict whimsical, magical scenes like people living in trees, flying whales carrying baskets of people, and mice traveling by hot air balloon. Last year I was reintroduced to Johanna’s work when I read New York public librarian Betsy Bird’s glowing review of her picture book The Secret Circus where Ms. Bird wrote “Reading this book is like taking a trip to a world that you are desperately afraid you might wake up from.” You can read the whole review here. 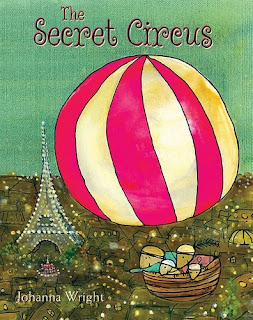 Johanna Wright grew up in Eugene, OR, and studied puppetry and children’s books at Evergreen State College in Olympia, WA. After college she moved to New York City where she sold her artwork on the street outside the MOMA for several years before working as a painting assistant for Oliphant Studios. While in New York, she also studied picture book illustration with Brian Floca. Presently, she lives in Portland, OR, with her husband and their two cats. Her first picture book, The Secret Circus (Roaring Brook Press), was published in 2009. Her second picture book, Bandits (Roaring Brook Press) will be published next year. She is also the illustrator of the middle grade novel Clover Twig and the Magical Cottage written by Kaye Umansky which was published last year. And she is illustrating Bonnie O’Boy Rides a Bike by James Proimos which will be published in 2011 by Dial Books. Her artwork is also being featured at the Bethel Street Gallery in Honolulu, HI. 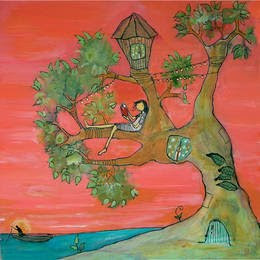 If you’d like to learn more about Johanna Wright, the Oregon Art Beat has a great video interview with Johanna where she demonstrates her process in creating her artwork. There is also a wonderful interview with her on Seven Impossible Things Before Breakfast, and another on Amy Baskin’s blog Euphoria. And of course there is her website where you can learn more about her books, view more artwork, and follow her via her blog. I had a hard time picking which paintings to feature here today, so if you like her style I highly encourage you to visit the links and get lost in Johanna Wright’s imagination for a little while. 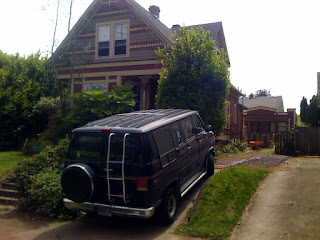 I work in an upstairs bedroom of our old Victorian house where I live with my husband and two cats, (who are banished from the studio, btw. The cats, that is . . . not the husband!). The room is square and is painted yellow with slanted ceilings. It has a tiny closet and two windows that look out on the backyard. I have an enormous painting table, a small computer zone, a book shelf with kids books, and a large supply shelf. It’s a bit chilly in the winter up here, and a bit toasty on warm days, but I love working from home! 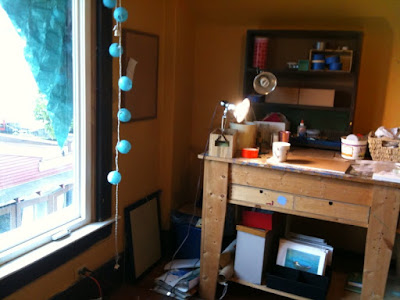 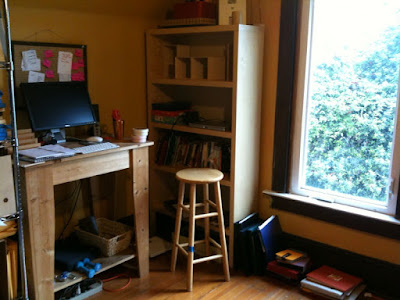 Well, I’ve tried for years to get up super duper early, but that rarely lasts for more than a few days in a row. In general, I get up around 7:30, have some breakfast,  head to the coffee shop where I work on new book ideas, make to-do lists, and answer emails.  I love getting out of the house first thing in the morning, it really sets the tone for my day. When I get back to my studio around ten thirty, I answer more emails and paint for a few hours. In the afternoons I run errands, order supplies, ship artwork, and answer more emails. (Can you see a trend here? I have a love/hate relationship with emails!) If I have a big deadline I’ll paint again in the evening. 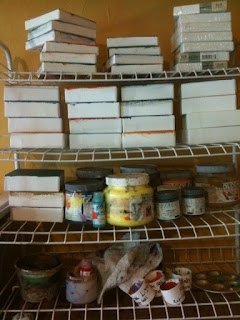 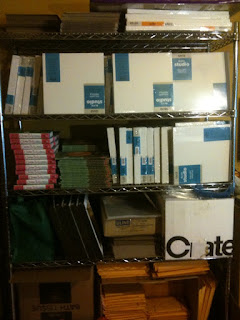 I usually paint with acrylics and black india ink on stretched canvas. Occasionally I’ll do an illustration piece on watercolor paper, or bristol paper. 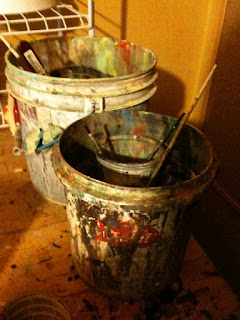 I love my dip pens.
Audiobooks. I listen to them all day long.
Coffee cup! And hot water maker for an emergency cup of tea. 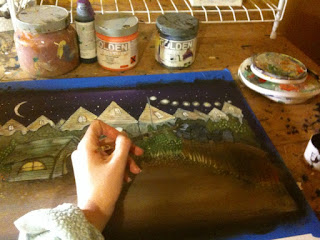 I’m not the tidiest person in the world, but I like things to be clean and orderly before I start to paint. So I usually spend some time before I begin getting everything in order. 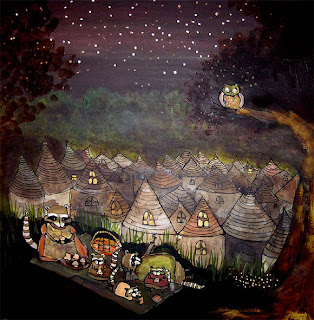 Audiobooks and NPR. I rarely listen to music while I’m working. I love the Harry Potter series, and I’ve heard all of those books a million times, so that is what I reach for when I’m working on something tricky that requires a certain amount of concentration. I also love to listen to best sellers, all kinds of young adult and middle grade novels, thrillers, classics . . . you name it. I’ve found that occupying the part of my brain that listens to these books frees me up to be more creative. I don’t put a lot of conscious thought into what I’m creating when I’m listening, and I think that is usually a good thing! 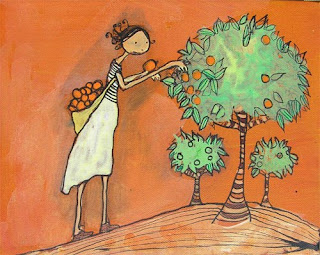 I eat a lot of almonds, popcorn, and apples with cheese when I’m working. I’ve found that the more I snack, the longer I can work. Being hungry makes me distracted and irritable, not a good combo! I usually start the day with coffee, but switch to tea in the afternoon. Otherwise, I’ll be up all night!

I make a really detailed to-do list, every day. I LOVE crossing things off that list. Simple, but effective! Also, when I’m having a really hard time getting started on something that I don’t want to do, I’ll set a timer for ten minutes. I’ve found that I can do a lot in ten minutes, and I have a lot less resistance to doing big tasks if I break things up like that. 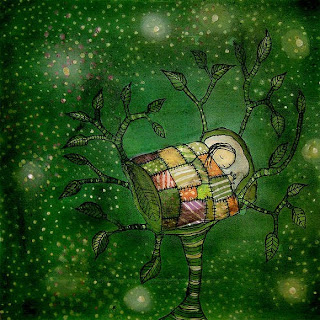 For me, the initial sketching stage (before the painting stage) is really tough. The layout of the page, and getting everything to flow properly, isn’t easy for me. And I LOVE working with paint, so the whole pencil-and-paper thing, makes me antsy sometimes.

Hmmm. . . you know, I would probably choose one of my friends that is a knitter or a sewer. I am so inspired by textiles, and I love being surrounded by pretty fabric and yarn, but I totally stink at knitting and sewing!  I’ve actually shared studios with all kinds of folks over the years, but those textile folks are the best. They bring a certain anchor to the space that makes me feel grounded. 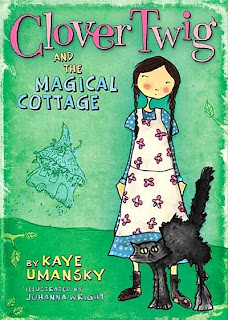 Illustrate what you love, and bring your true self to your artwork. I know that is really cliche, but at the same time, it’s exactly what has worked for me over the years. It’s something I come back to again and again, and it always helps me grow toward something new. 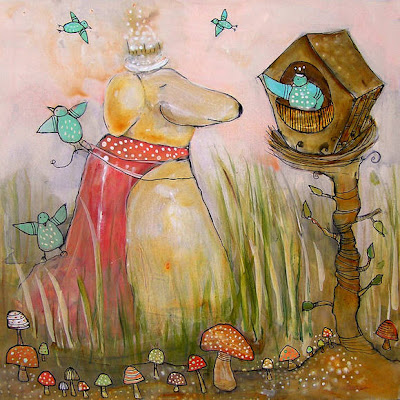