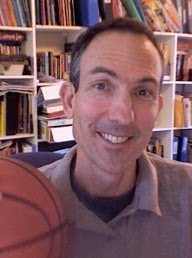 Happy Monday, everyone! I usually post my Creative Spaces interviews first thing Monday morning but Blogger was having a technical issue that wouldn’t let me access my posts between last night and now. So I apologize for the delay.

We’re starting this week off with a look at the workspace of writer Bob Krech. Bob Krech is the author of YA novel Rebound and middle grade novel Love Puppies and Corner Kicks.

From the publisher Marshall Cavendish, here’s the summary of Rebound:

“It looked like every black kid in the school was going out for the team. And then me. Pale skin, long nose, sandy brown hair, and a cowlick that won’t stay down. I don’t know what I expected, but it wasn’t being the only white guy. Black kids play basketball. White kids wrestle. That’s the way it is at Franklin High School and especially in Ray Wisniewski’s neighborhood, the tight knit Polish-American town of Greenville, New Jersey. But Ray’s got a passion for basketball, even after the varsity coach cuts him two years in a row. When a new coach comes on the scene, Ray’s luck rebounds, but now he has to deal with Robert, the team’s high scorer, a kid who hates Ray simply because he’s white. As Ray fights to make his way onto the Franklin High Varsity, he finds that things are not as simple as he once thought—that a kind friend can be full of hate. A beautiful girl can be ugly inside. A well-intentioned coach can cause more harm than good. And prejudice can be defined in many ways in a world that isn’t black-and-white.”

Rebound was a 2007 American Library Association Best Book for Young Adults. Kirkus Reviews said, “The author clearly knows the world of high school basketball. Sure to be a slam dunk success with players and fans alike.” And Walter Dean Myers (the critically acclaimed, multi-award-winning author who is well known for being passionate about basketball) said, “Rebound is one of the few basketball books I would read again.”

Love Puppies and Corner Kicks was published in February of this year and is quite a departure from Rebound. It’s a light and funny middle grade novel about 13-year-old Andrea whose family has uprooted her from her American life, where she has great friends and is the leading scorer on her soccer team, to live in Scotland for a year. I recently read Love Puppies and I have to say, this is one of the funniest middle grade books I’ve read in awhile. There is a bus scene where Andrea goes on a bit of an unplanned adventure that still has me laughing when I think about it. And watching Andrea transition to her new life in Scotland was fascinating–the observations she makes about the culture and ways of living there, the confusion she has over language differences. I felt like I’d visited Scotland once I finished the book. There are also a lot of great soccer scenes for soccer aficionados that are depicted in a way that you can follow what’s happening whether or not you’re familiar with soccer. Fans of Denise Vega’s Click Here and Access Denied books will surely like Love Puppies and Corner Kicks too.

In addition to Rebound and Love Puppies and Corner Kicks, Bob Krech has written numerous short stories and articles and more than 15 books for teachers through Scholastic. He lives in New Jersey with his family where he works as a teacher coach for math in grades K-5. To find out more, you can visit his website. 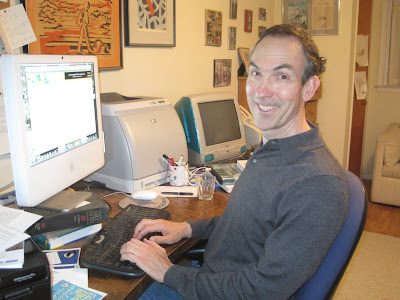 I use an extra bedroom. When we bought this house 19 years ago, I had my eye on that bedroom and quickly made it into my office/writing space. It is kind of long and narrow with windows on the north and south ends. My computer sits on a desk top. Literally. It is sort of kidney bean shaped and a huge piece of wood. My father found it in the trash behind a bank where he worked. Some executive was throwing it out. I put two file cabinets under it to hold it up. It’s got two printers, two computers, and a fax machine on it, along with files, tapes, books, paper, a phone, notebooks and other office stuff. I also have another old teacher’s desk where I do non-creative stuff; bill paying, etc. Lots of bookcases full of books and magazines, an old pullout couch (the office also serves as a guest room), a chest of drawers with art materials, and a corkboard with important information tacked on it. I have a couple of silk screen prints I did in college when I was an art major as well as some photos and certificates up on the wall. The space swings from neat to horribly messy. It is in the h-messy stage right now. 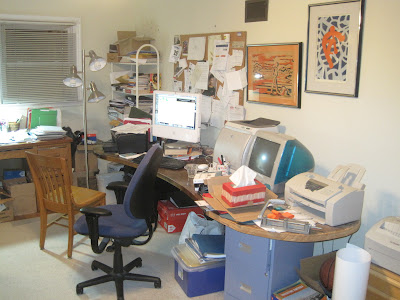 When I write, it is usually early in the morning or later in the evening due to the teaching day job anchored firmly in place by two college tuitions being paid simultaneously. There are some rare Saturdays and Sundays when I am working during the middle of the day, but that’s pretty unusual. 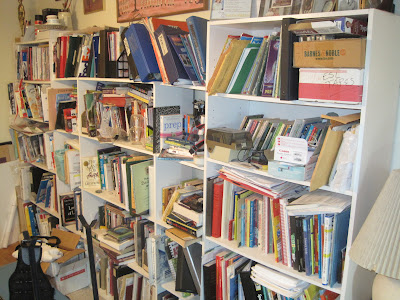 The tons of books. I sometimes dip back into them for inspiration. Photos of my kids which just give me a good feeling when I glance at them. My first published article for a decent-sized magazine where they paid me real money, is framed and up on the wall. It reminds me that, hey maybe I’m actually an OK writer. Somebody thought so.

I usually warm up by checking my e-mail, cleaning up the computer desktop a little, and then rereading the manuscript where I left off. 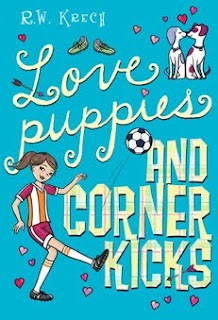 It depends on the book. Sometimes I need just very mellow instrumentals as background that won’t interfere with my thinking. Could be Classical, Jazz, almost anything. Other times I need a little Grateful Dead or something that fits the theme. Write now I’m doing some work on a book where punk rock is a big part of the story so I’ve been playing “Stranded” by The Saints. That’s a fun song!

When I’m good, green tea and multi-grain toast with tahini. When I’m bad, Cheetos and ginger ale. I try to avoid getting the keyboard orange.

I mentally get into that other place where the story is happening. I also close the door.

I almost always write on the computer and then edit a hard copy with a red pen. Classic teacher! 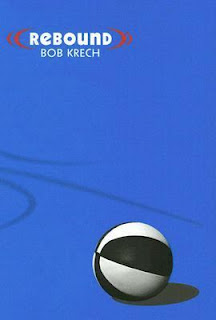 I’ve done it both ways. I’m thrilled if I can outline a book, but sometimes I just get a scene in my head and keep writing from there with events that occur after it or before it appearing in my imagination in no particular order. I just keep writing and asking myself questions about where the characters came from and what they want, and that will usually lead me forward.

Walter Dean Myers. We could talk basketball and writing when we felt like it, but he is also so prolific and focused that we’d each get a lot done.

Read everything and keep your butt in the chair.