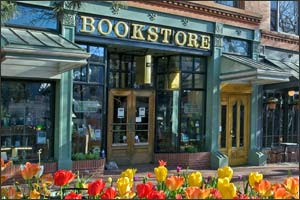 My husband and I had a date night a while back. Sushi at our favorite spot in Boulder and then wandering down Pearl Street, an outdoor pedestrian mall. We were making our way to the candy shop, a route that passes the Boulder Bookstore. And I can’t wander by the Boulder Bookstore and not go in, so we did. We wound our way back to the children’s section and this book immediately caught my eye:

Once I Ate a Pie by Patricia MacLachlan and Emily MacLachlan Charest, illustrated by Katy Schneider. With that combination of title and the cute little pug on the cover . . . my husband and I are dog lovers so I couldn’t resist picking it up. The book is a collection of poems, each a portrait of a different dog. The first one is titled “Puppy” and the illustration features a German shorthair pointer puppy. Last summer our German shorthair pointer passed away, a loss we weren’t expecting and weren’t prepared for, so any time we see a pointer these days–real or fictional–it has our attention. The puppy poem was sweet. Here’s a snippet:

What if I get lost?

“You will chase snowflakes in winter,” the people tell me.
“Run through the grasses in spring
and howl at the full moon.”

It tugged our heartstrings. Then we turned the page and met Mr. Beefy. Mr. Beefy is a rotund pug, older looking than the one on the cover. In the illustration he’s lounging next to an overturned pie tin, a sad but satisfied look on his face. The look of a dog who has been scolded but would do it all over again if given the chance. From Mr. Beefy (I hear him in the voice of Kevin from The Office): 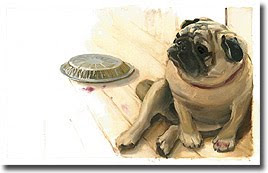 I am not thin, but I am beautiful.

When no one is looking, I steal tubs of butter off the table.

I take them to the basement to eat in private.

Once I ate a PIE.

What I can’t translate from the book is the design of the typesetting. In Mr. Beefy’s poem “thin” is printed in tall, stretching letters, “beautiful” in a graceful arc. “When no one is looking” is printed with each word on a new line, every word a step ahead of the other like an imitation of Mr. Beefy sneaking down the stairs into the basement. “Once I ate a pie” is in a bigger, bolder font than the rest of the poem, “pie” in all caps. The visual stress on that sentence and the word “pie” in particular communicates to me Mr. Beefy’s pride, and  perhaps braggishness or disbelief, of this major feat.

We laughed out loud reading Mr. Beefy’s poem. Not only because it was funny, but it was familiar. Our Ace, the German shorthair pointer, was notorious for snagging unguarded food. Chicken carcasses left on the counter that we thought were out of reach, a half-eaten sandwich left unattended for one second when you ran to the other room, an entire Halloween bowl of miniature Reese’s peanut butter cups with the aluminum wrappers still on, carelessly left on the coffee table, that prompted a late night run to the emergency vet. If you left the trash can out, Ace would rummage through it as soon as he got the chance. I’d be in the basement switching a load of laundry and above me I’d hear his toenails slowly clicking across the floor like he was sneaking up on something. Click. . . click. . . click. What is he doing, I’d wonder. Then I’d remember I hadn’t put the trash back in the cupboard. “Ace!” I’d yell and run up the stairs. When he knew he was caught he didn’t run away or hide, he just ate faster, trying to get every last bite before his scavenged prize was taken away.

Our other dog, Jack, steered clear of Ace when he was getting into food he shouldn’t. It was always a sign that Ace was doing something naughty if Jack came running down into the basement and hopped onto the couch, his safe spot. Once he was caught, Ace would be put into time out in the bathroom while his mess was cleaned up, and that’s when Jack would make his appearance. Giving us the poor pitiful eyes to remind us that Ace had just helped himself to a delicious treat while Jack  was an obedient dog and had none of it. Since we’re suckers, Jack would get a treat for not stealing the food himself, although we always wondered if Jack might have been the brains of the operation. Pointing out the food opportunity to Ace and then running for it, leaving Ace to be the fall guy so Jack could in turn get our praise and treats in the end. 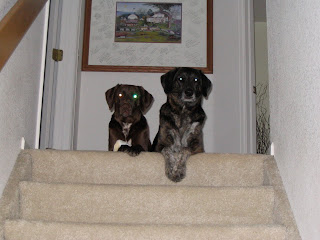 These are the stories we started retelling each other in the bookstore as we stood there and read aloud every poem of Once I Ate a Pie. If you’ve ever lived with a dog or known one well, you’ll identify with these poems. They cover a whole range of personalities from the protective German shepherd to the sleeping old dog to the Pomeranian who barks the alarm for every little thing. I bought the book on the spot as well as a copy to give to another dog-loving friend I thought of. It’s a book I know I will reread a hundred times over, at least, and an instant addition to my favorites list.

Not only is this book highly recommended for dog lovers, I see a lot of potential as a teaching tool as well. When I teach a writing class in the future, I almost certainly will use this book as an example of the power of precise word choice and arrangement. How an economy of the right words in the right patterns can so clearly bring characters to life.

Students can discuss, for example, why they think the “high” in the first poem is printed in an arch, like a rainbow. Why are some lines staggered? Why are some words bold faced? What effect do the differences in text layout and design have with how you read and hear the poem? You could do an exercise having students read a pre-typed version of one of the poems, written in straight lines without the spacing and special emphases, and then show the published version and ask students to compare the experiences of reading each. You could read a poem aloud and ask students to guess what the dog looks like and then reveal the picture and talk about how their guesses compare. Students could write poems that capture the personality of their own pets, and if they don’t have pets then an animal they know–grandma’s cat, a squirrel who frequently visits their yard. Or use photos of animals they don’t know and have them make up poems that create a character based on the photo.

We’ve been meaning to put together an album of photos and memories of Ace. We have a haphazard pile of photos and scribbled notes and stories about him, but nothing that’s been organized into an album yet. Once I Ate a Pie inspired me to write three poems about Ace. A good start to the memory album and a fun way to remember him.

I worry I won’t get any of the food you are eating.
I worry the cat is getting more attention than me.
I worry if he’ll come home again.

But then I remember my pillow.

I run and find it,
do a victory lap,
and lie down with my pillow.
Hug it between my front paws
suckle away my worries.

And then I am asleep. 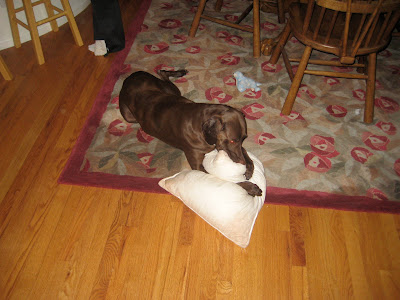 5 Responses to “Love This Book! Once I Ate a Pie”