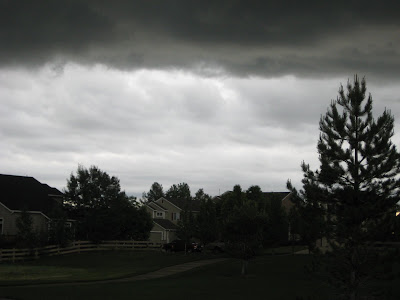 1. I was five minutes into my workout at the gym the other day when everyone was evacuated to the locker rooms for a tornado warning. Now, something you should know about me: I’m a born and raised Californian. My only exposure to tornados for 28 years of my life was The Wizard of Oz and the movie Twister. I can sleep through an earthquake, but that beepbeepbeep weather alert warning that scrolls across the TV here for a tornado watch can get my heart racing in a panic. The first week I moved to Colorado, I was home by myself unpacking with the TV on when they interrupted the programming for a tornado warning weather alert. I called my husband who was at work (and had lived in Colorado for about ten years at that time), simultaneously feeling irritated he hadn’t forewarned me I was trading San Francisco for tornado country and embarrassed that I hadn’t already known this myself.

While I waited to be connected, I paced the kitchen wondering what I should do. Hugging the phone between my ear and shoulder, I pulled an assortment of canned goods from the cupboard, thinking I’d have to bunker down in the basement with our animals. Were the windows supposed to be boarded up or was that for a hurricane? Would the power go out–did I need a flashlight or candles? Did we even own a flashlight or candles?

My husband answered the phone and I told him in a rush that a tornado was coming. He said, “What?”

Very calmly he asked me, “What county?”

“What do you mean ‘what county’?” I asked, looking out the window into the gray skies, expecting to see a cow whirl past at any moment just like in The Wizard of Oz.

“They run those alerts for all of Colorado.” he said. “Did they say our county?”

Holding the canned goods like a baby with one arm, I walked back to the TV and read the message that was still scrolling across the screen.

“None of those are our county,” my husband said, extra kindly.

“Oh,” I said and went to put the canned goods back in the cupboard.

So that was my introduction to Colorado’s tornado alerts. I’ve gotten more comfortable with them over the years and have learned to trust that they really don’t often pertain to our area. Or if they do, it’s for small funnel cloud sightings that don’t necessarily touch down to the ground, not Dorothy-sized twisters. Most people I know here generally have a very nonchalant attitude toward tornados. But at the gym the other night when they requested for everyone to evacuate to the locker rooms, I felt for a moment my original sense of panic return. It didn’t help that we were having a major thunder and lightning storm. Rain pelted the skylight over my elliptical, and the glass would flash white then back to charcoal, followed by thunder so strong the building rocked. When we’d arrived they’d already evacuated the pool because of the lightning, and those people had been milling around the hallways (thunderstorms in Colorado can pass by quickly). When they announced for people to seek shelter because of a tornado warning, people first looked dubious and confused. I pulled out one earbud to listen to the announcement and a staff person marched by, pointed to me and shouted, “Ma’am! I need you to relocate immediately!” The energy in the gym shifted from confusion to a nervous tension as people quickly filed into the locker room. My husband and I met up, both a little baffled having never been in a tornado evacuation before. We couldn’t quite believe it was as urgent as everyone was making it seem, and since we weren’t sure how long we’d have to sit in the locker room we decided to instead drive the five minutes back to our house to be with our dog and cat. We asked a teenage employee if that was okay and she said, “Sure. But it’s real stormy out there.” We assured her we understood and headed toward the exit when we were stopped again by the initial woman who had commanded me to the locker room. “Everyone needs to go to the locker room!” We told her we were going home, which flummoxed her a bit, and then she said, “It’s a tornado warning! You shouldn’t go out there!” We continued on but as I pushed through the exit doors I was once again expecting to see that cow from The Wizard of Oz spin by. But it was the same curtain of rain we’d run through on our way inside. We made it home safely, no funnel clouds spotted in the sky, and tried to comfort our dog who gets spooked if the volume on the TV is too loud. About ten minutes later the rain stopped and the thunder was a faint rumble in the distance. I’m sure the locker room evacuation was standard procedure for a tornado warning, but I couldn’t help think that the way that one staff person had handled the situation was a little Chicken Little-ish.

2. As you may already be aware, earlier this week YA author Maureen Johnson wrote a manifesto (accidentally) on branding. If you haven’t already read it and are interested in the topic of if/how authors should market themselves, I highly recommend it. Essentially, the point she is making is that she’s uncomfortable with the idea of “the author as a brand” and puts forth a lot of good reasons why. It’s a funny, entertaining read that got me thinking about a variety of tangents related to what she said. I was jotting down my thoughts, intending to compile them into a post of sorts, and then I read this post by Greg Pincus, “Manifestos, Branding, and Zing”. And yeah, what he said. He expressed everything I was thinking (and then some) but much better than I would have.

3. If you write, read, teach, collect, study, or are a fan of middle grade books, there’s a new website worth checking out. I’m inclined to like them just because they have an awesome name, but it looks like they will also be a great resource for all things middle grade. The site is “From the Mixed-Up Files of Middle-Grade Authors” (see why I like it?), and it’s worth a look.

4. Another favorite group blog of mine that’s worth checking out is “The Dust of Everyday Life”. This blog features the work of a wide variety of children’s book illustrators, and each month has an optional theme (this month the theme is “elephant”). Every day new artwork is posted. Elizabeth Dulemba, whose workspace was featured in Creative Spaces awhile back, is one of the many contributors. I’ve been introduced to so many wonderful artists through The Dust of Everyday Life, and it’s inspiring me to create some of my own (amateur, very amateur) art. One of the many new-to-me artists whose work I’ve become a fan of is German illustrator Bernhard Oberdieck. Here’s an example of his work that was shared on The Dust of Everyday Life in May: 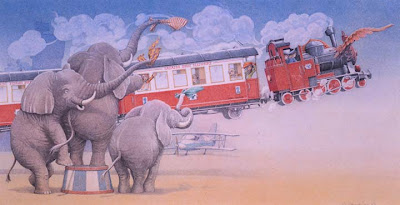 6. Anyone else out there watching the new season of So You Think You Can Dance? What do you think of the top 11 and the addition of All Star partners? Any early favorites? Did you like the Meet the Top 11 showcase on Thursday night?

I enjoyed the showcase, but in several numbers I felt like the contestants were overshadowed by the All-Stars which was a little distracting.  I love, love, LOVED the opening Mad Hatter Wade Robson number. My favorite of the others was Travis Wall’s, which seemed like a YA Victorian vampire novel come to life. (I don’t think they were supposed to be vampires, that’s just what it made me think of.) That was also the only dance where my attention went to the newbies instead of the All Stars, which makes me think Kent and Lauren are going to be seriously good contenders. (Well, Mia Michaels routine too but that doesn’t seem quite the same because each dancer had a long solo.) But my early favorite is Alex Wong. I’m most looking forward to seeing his routines. I’m hoping to see more routines by Shane Sparks this season. His zombie routine with Kayla and Jason was SICK and remains one of my all-time favorites.

3 Responses to “Six Things on a Saturday”