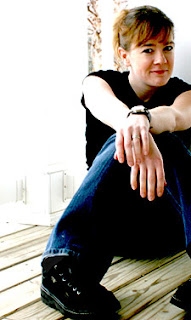 This week we’re stepping into the creative space of author Maggie Stiefvater (pronounced Steve Otter). Maggie is the NYT bestselling author of Shiver, the wildly popular first novel of the Wolves of Mercy Falls trilogy. Linger, the sequel, was published this month from Scholastic. (Officially this week, although it was spotted in many stores earlier in the month.) The final installment in the trilogy, Forever, will be published in July 2011.

Maggie is also the author of the Books of Faerie series which includes the titles Lament and Ballad, published by Flux. Lament was her debut novel and was given a starred review from Booklist who wrote: “This beautiful and out-of-the ordinary debut novel, with its authentic depiction of Celtic Faerie lore and dangerous forbidden love in a contemporary American setting, will appeal to readers of Nancy Werlin’s Impossible and Stephenie Meyer’s Twilight series.”

I love how Maggie describes herself on her website: “All of my life decisions have been based around my inability to be gainfully employed. Talking to yourself, staring into space, and coming to work in your pajamas are frowned upon when you’re a waitress, calligraphy instructor, or technical editor (all of which I’ve tried), but are highly prized traits in novelists, musicians, and artists (I’ve made my living as one of these since I was 22).

I now live an eccentric life in the middle of nowhere, Virginia, with my charmingly straight-laced husband, two small kids, two neurotic dogs, one criminally insane cat, and a 1973 Camaro named Loki.

I’m an avid reader, an award-winning colored pencil artist, and play several musical instruments, including the Celtic harp, the piano, and the bagpipes. I also make great cocktail party conversation.”

Along with appreciating her humor, I was especially intrigued by the “award-winning colored pencil artist.” I knew about the other details from following her blog, Tweets, and being a general fan of Maggie and her work, and I knew she was a highly artistic and creative person and skilled at an impressive number of things. But award-winning colored pencil artist? Intriguing! I did a little internet digging and quickly discovered this site where. . . WOW! Maggie fans, did you know she could draw like that? (Over there, to the left, that’s one of her portraits available on Portraits with Character. I suspect it might be the criminally insane cat she mentions.) Too bad I didn’t know about this earlier. I would have loved to have commissioned her for a portrait of my pets but I imagine she’s a wee bit busy these days.

In addition to everything else, Maggie also regularly contributes original short fiction along with her writing friends and fellow authors Tessa Gratton and Brenna Yovanoff at the blog “Merry Sisters of Fate“.

So now let’s visit Maggie in her writing space. (Can’t you just imagine her feverishly typing revisions of Forever here?) 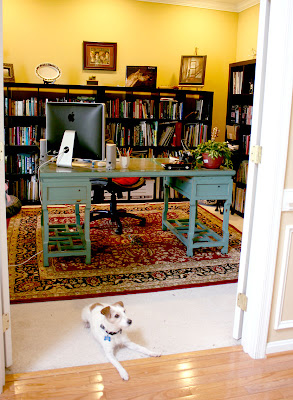 A photo of my studio from the foyer, which makes it look like a rabbit hole. And also makes the shelves look way smaller than they really are. I suppose it sort of is a cave of books.

I work in a dedicated studio/office (I guess the latter is more true, but I still think of it as a studio from my portrait artist days) that’s about . . . 15’ x 15’. It’s located quite close to my kitchen and my bed. Also it has high-speed internet. Also it has two big windows that make it very bright in the afternoon in particular. The trifecta of Maggie requirements. The studio’s also rather like an aging tree. You can count the rings in a tree’s trunk to see how old it is. You can count the bookshelves in my office to see how many months I’ve been there. I’ve just had to get another one, despite donating several dozen books to the library. And I’ve just gotten a new desk because the old one wasn’t quite big enough to hold the giant piles of clutter. 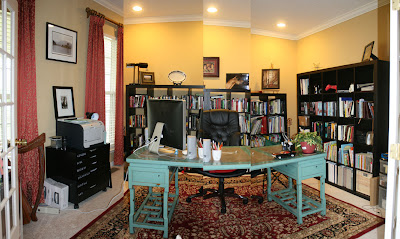 My panoramic pasted together studio shot.

I don’t think I have a typical workday. Is that bad? It really depends on the project and that’s one of the things that I love about this job. I guess the only usual thing is that I will start the day by answering emails for about an hour, maybe poking my head into some writing forums I belong to, generally being sluggish. Then I get down to work, which might be actual writing, or may be answering interviews, working on book trailers, blogging, etc. 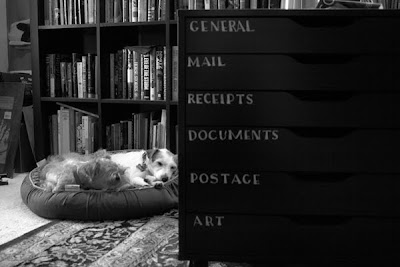 My dogs, Peanut and Ginger (mother and daughter), in their ever present dog bed in the office. Wherever the bed is moved, that is where they sleep. In this case I had just finished the lettering on my file cabinet and they were bored with watching me. 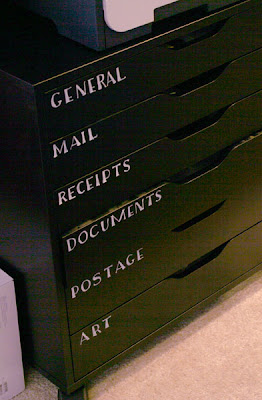 Well, I used to have a plant named Boris that has been to many art shows with me when he wasn’t holding down my desk, but in this house, he needed more sunlight, so now he’s in the living room. I miss him but I have an unnamed plant in his place. This new plant is not very talkative. I secretly suspect that New Plant prefers nonfiction. 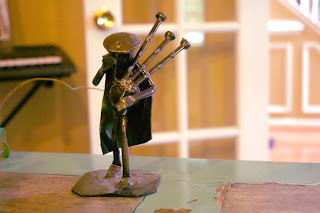 My railway spike piper, who plays the pipes when I’m not.

I also have a little weird bagpiping guy made out of a railroad spike on my desk. He’s meaningful because I’m a piper myself (played competitively in college) (yes, you may make fun now) and because I got him in a time when I thought I wouldn’t be able to play pipes any more.

And I have a variety of paper birds and cranes that I folded while writing Linger. It was combination research and therapy.

Music is pretty much the only one. I suppose I also like to have a cup of tea (English breakfast with milk and sugar, thank you, if you’re offering), but I can work without it. It would be very difficult for me to get down to work without seeing what was lurking in my inbox first, so maybe we can count checking my email first thing as a ritual. 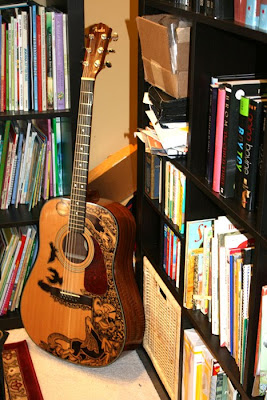 My guitar which is in the corner of the shelves behind the desk. Yes, that is Sharpie on it. I’m not a good person to leave with permanent markers about.

Whatever my current project demands. I have dedicated playlists that go with each novel, so if I’m writing one of the Shiver books, I’ll have emo indie rock on. For the faerie books, it’ll often be something Celtic. Left to my own devices, I’m always playing alternative rock of some variety. 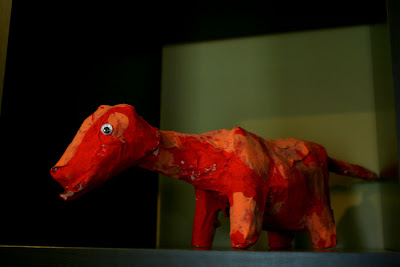 The paper mache dog-faced dinosaur that my daughter made in kindergarten. I think it adds color, don’t you? 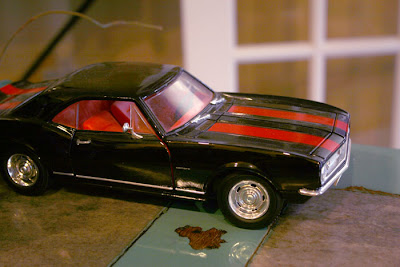 The model Camaro on my desk, four years older than my real ’73 Camaro in the driveway.

Music. If I don’t have it playing, I simply cannot focus. Dirty secret? I’m not very good at sitting still.

On the computer. The deeply romantic part of me would like to write long hand, but the truth is that I can write upwards of 90 words per minute on a computer and . . . . um, not 90 words per minute when doing it longhand. My brain just gets frustrated trying to match to the speed of me writing it out by hand. Plus, I doodle when I have a pen. That’s not helpful.

After I get an idea, I usually spend a lot of time pacing and a lot of time laying on my floor listening to music. Mostly, I need to have a rough end point before I can start working. Oh, and mood. Music helps with that too. I really need, more than plot, a feeling that I want the book to have. Themes that I know I want to tackle. I firmly believe that you write just like you do everything else in your life. I’m not very organized in the rest of my life, so my writing process is pretty spontaneous too.

Either of my two fantastic critique partners, Tessa Gratton or Brenna Yovanoff. I practically share it with them anyway, as we chat every day on IM. We also write short stories on a group blog.

From my first editor, Andrew Karre: make every sentence do double duty. Words shouldn’t be just describing a place, or forwarding the plot, or deepening character. They should be doing two things at once.

And from Tessa, my crit partner: shut up and write. Paraphrased. But it works.