Congratulations to Mike, our second BINGO winner! Mike chose OH NO! (Or How My Science Project Destroyed the World) as his prize. Susan, our first winner, chose the signed copy of Linger. Still 13 fantastic books left to be won. . . 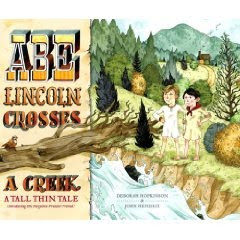 Bingo Book #25 is Abe Lincoln Crosses a Creek by Deborah Hopkinson! This historical fiction picture book received starred reviews from Booklist and School Library Journal when it was published in 2008 for Lincoln’s 200th anniversary of his birth. Of the book, School Library Journal wrote: “Hopkinson has created a lively, participatory tale that will surely stand out among the many titles published to honor the 200th anniversary of Lincoln’s birth. With a conspiratorial wink at the audience, an omniscient narrator invites readers to watch seven-year-old Abe and his real-life friend Austin Gollaher succumb to the “dare you” lure of a roaring creek and a perilous crossing on a fallen log (an author’s note details the genesis of the story). Imagine where we as a nation might be if unsung-hero Austin hadn’t been there to rescue impetuous Abraham from his tumble into those tumultuous waters. In dialogic asides and exclamations, the author addresses the illustrator and brings him (or, rather, his pencil-wielding hand) onstage to collaborate and correct, and also speaks to readers, inviting involvement and evoking response.”

To learn more about Deborah and how and where she drafts the more than 40 titles she’s published, visit her Creative Spaces interview and her website.