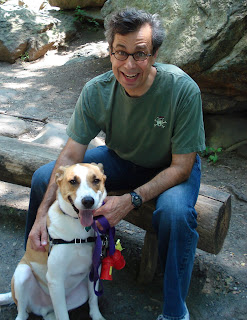 The gentleman to the left may look friendly and charming, but he’s also the mastermind behind some spooky, creepy stories including The Crossroads and The Hanging Hill which are both part of the Haunted Places Mystery series, as well as several mystery/thriller titles for adults. His books have been lauded by critics with The Crossroads winning The Anthony Award for Best Children’s/Young Adult novel and The Hanging Hill winning the 2010 Agatha Award.

His latest book in the Haunted Places Mystery series for young readers is The Smoky Corridor and will be available in stores this week. All three books feature Zack Jennings and his dog Zipper and their unfortunate run-ins with ghosts and zombies. In The Smoky Corridor, Zack is starting his first day at a new school but in addition to the usual new-kid-at-school worries, Zack has to contend with a school zombie, a hit man, and a ghost looking to take over a new body. Kirkus Reviews writes, “Agatha winner Grabenstein’s third Haunted Places Mystery is as fizzy and fast paced, especially at its end, as previous outings. Plenty of well-constructed twists and turns, realistic (rather than slapstick) humor, nifty puzzles and a refreshingly positive relationship between Zack and his stepmother make this a standout series for fans of John Bellairs and those who have outgrown the repetitiveness of R.L. Stine. This stands alone, but those who haven’t read the others will definitely want to seek them out.” 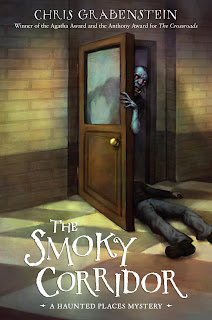 His books are well-crafted mystery and ghost stories, but they are also peppered with humor, which shouldn’t be a surprise when you look at Chris Grabenstein’s background. He spent years doing improvisational comedy in a group that included a then unknown Bruce Willis, and Chris went on to write for Jim Henson’s Little Muppet Monsters show on CBS. (Being a huge Jim Henson fan myself, I was wowed to learn that tidbit.) He also co-wrote a TV movie that many of you are probably quite familiar with as it is rerun almost every year around Christmas time–The Christmas Gift starring John Denver.

Another interesting detail about Chris Grabenstein is that he has a famous dog! His dog Fred starred on Broadway in the production of Chitty Chitty Bang Bang before Chris and his wife adopted him. There is a great article about Fred here, and be sure to check out Chris’s website as well for a wonderful collection of pictures of both Fred and his feline playmates.

As his website states, Chris Grabenstein “puts the boo in books”. Let’s step inside his workspace and get a peek at how he crafts his spooky mysteries:

I work in what would be the “spare” bedroom in our two-bedroom apartment on the upper west side of Manhattan.  I share the room with the cats’ litter box and my wife’s Whisper Room soundproof booth.  My wife is a voice actress and my office doubles as her recording studio.  She’s fantastic and is the voice on the audio book versions of The Crossroads and The Hanging Hill.

I am a true Virgo — a creature of habit.  My day starts walking or running with Fred our famous dog (he was in the Broadway cast of Chitty Chitty Bang Bang before we adopted him).  While walking or running I daydream about what I will write that day.  I always carry note cards and Sharpie pens and probably stop about six times during our five-mile runs when ideas bubble up.   After a clean up and some toast with almond butter, I sit down at my keyboard and start putting words together.  I first go over the two thousand words I wrote the day before, making light edits, but mostly just getting back “into the zone” of the story.  I then move forward another 2,000 words.  I do this five days a week so I usually complete a first draft of a young adult book in six weeks.

Well, number one has to be Tiger Lilly, our youngest cat, who spends her day in a baby blanket lined in-box keeping me company.  Once or twice a day, she wanders over to my keyboard and nudges my hands, telling me it’s time to stop writing and start petting. 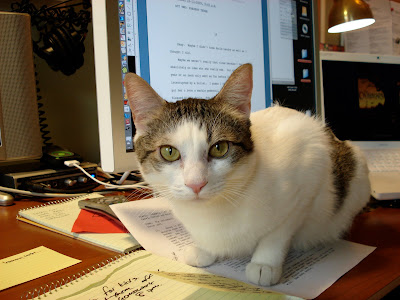 Number two is probably my iTunes library and Harman Kardan music speakers.  I write to music, putting together a different playlist for every project I’m working on.  Music helps me get into the mood.

Number three is probably my model of the Engine 23 Fire Truck given to me by one of my best friends, a Captain in the FDNY.  When one of my adult mysteries came out, we had a book party fundraiser at the firehouse and raised five thousand dollars for the FDNY Burn Unit. 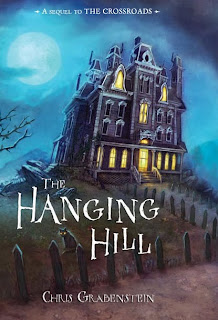 So many.  There must be a mug of coffee and a re-useable bottle of ice water.  The music must be just right. I also have 8 different corkboards in my line of sight, which I fill with notes and photos of faces and places.   I always “cast” my stories with pictures of everybody in the book so I know who I am making up. I rewrite my outline almost every other day because I improvise within the structure as I write and try to surprise myself with twists and turns I didn’t see coming.  At the end of my writing day, I usually play a quick game of NCAA Football on my PS3.

That depends.   For the Haunted Places mysteries, I have a collection of soundtracks from movies such as The Mummy, Harry Potter, The City Of Ember and all sorts of thrillers.  I also sprinkle in some music of particular interest to the book I’m working on.  For instance, The Smoky Corridor, coming in August, has a voodoo subplot so I put in a couple chants and several versions of “Iko Iko”.

When I write my adult Jersey Shore mysteries, I have a playlist of 514 Bruce Springsteen mp3s.   For a new idea I’m working on, a middle grades caper series, I have all the music from Ocean’s Eleven through Thirteen and the Mission Impossible sound tracks.

Well, as someone who, six years ago, went from 270 pounds to 170, and from XXL shirts to mediums, SNACKS ARE FORBIDDEN!   The beverages of choice are black coffee and ice water.

I compose my books on a computer (MacBook Pro with external keyboard so I don’t get carpal tunnel syndrome again; who can type 8 hours a day on those laptop keyboards?) 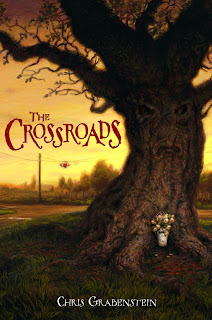 My notes and random story ideas are jotted down on 3×5 note cards in black Sharpie ink.   I carry cards and a Sharpie in all my jackets, pants pockets, etc. You just never know when the story will invade your brain.

I use a tent pole technique.   I structure my stories like a three act movie and know I need major turns (plot points) at 1/4, 1/2, and 3/4s of the way through the book.   So, if I am aiming for a 50,000 word middle grade book, I know something big has to happen at 12,500, 25,000 and 37,500 words.  I usually plot out these points in advance, know the major turns.   How I get there, I make up on a day to day basis.  Yes, I dutifully make an outline but once the characters start rolling they have been known to go where they want to go, not where I intended to send them. So, I rewrite my outline every two days and, for fun, go back and look at the first outline when I finish the rough draft, just to see how wrong I was when the journey began!

The story itself. I find that after twenty minutes, I drift off into a strange world where the characters are very alive and very real and the words flow somehow from my brain to the page.  I lose all awareness of my fingers actually typing.  I call this trance-like state “dreaming while being awake”.  As a former actor, I am in my head, playing all the parts, worried about how my characters are going to get out of whatever jam I just put them in.

Well, one day a week, because our cats shed so much hair, we have a cleaning person come in and hose the apartment down.   I go write in a nearby coffee shop, which I share with about 20 other folks.  Thanks to my headphones, my music, and my ability to zone out . . . it’s as if I’m alone.  And if one person, George S. Kaufman.  When he was alive, naturally.

Read, read, read.  Especially now that I am working on my 12th book in five years, I find it is crucial to soak up new words, other ways of expressing things.  If you don’t keep loading the brain, you’ll keep using the same images you’ve already used.