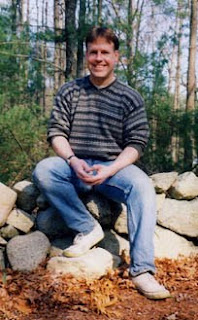 It’s my pleasure to welcome author/illustrator Brian Lies to Creative Spaces today. His last name is pronounced “Lees”, by the way. Counterintuitive to what you’re used to reading. (But oddly, the past tense is still “Lays”! Dumb grammar humor, anyone? Anyone?)

Brian Lies illustrated his first book, Flatfoot Fox and the Case of the Missing Eye by Eth Clifford in 1989. He has gone on to illustrate more than twenty picture books including Finklehopper Frog by Irene Livingston, and Deep in the Swamp by Donna M. Bateman. In 2001, his first authored and illustrated books were published: Hamlet and the Magnificent Sandcastle and Hamlet and the Enormous Chinese Dragon Kite. 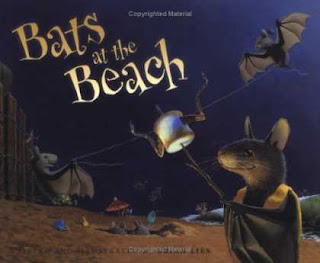 His latest, Bats at the Ballgame, was published in late August and has already made it on the New York Times bestseller list the first two weeks of publication! Here is a book trailer to give you a taste for what’s in store when the bats take a trip to the baseball stadium:

If you’re lucky enough to attend an author event with Brian Lies, you might catch a glimpse of his very own BATSmobile. If you’re not able to see him in person, you can visit his website to see what the BATSmobile looks like, and to learn more about Brian Lies and his work. 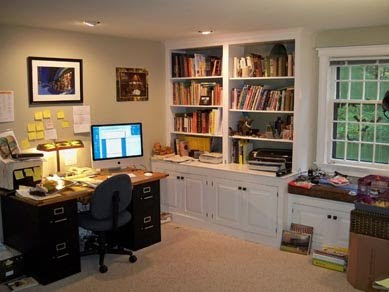 My office used to be the fourth bedroom in our house, but I built in a wall of bookshelves, cabinets and a window seat so it feels much more like a real office or studio.  When I’m writing, I need to shut the world out.  My writing desk is on the wall away from the windows, where I won’t get distracted.  But my drawing table is on the opposite wall, between two front windows, where I can see cars, bicycles and joggers going by in my peripheral vision.  Painting the final illustrations for a book takes so many hours alone in my office that it’s comforting to know there really are people out there in the world! 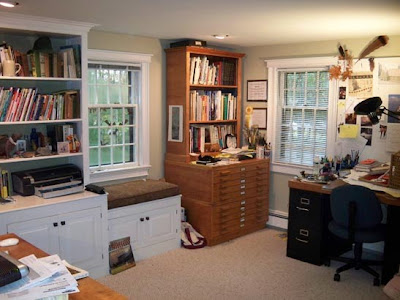 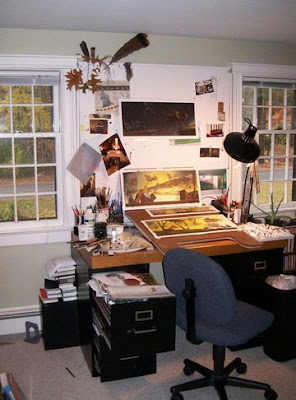 My drawing table, while I was painting pieces for Bats at the Library

One thing I like about this job is that my workdays aren’t typical.  On some days I’ll be writing, some days I’m painting, and on others I’m off at schools working with students.  I enjoy the variation—it means the job is almost never boring.

When I’m writing, I try to start the very first thing in the morning—5:30 AM, if I can make myself do it.  If I write before I’ve talked with anyone, seen the news or checked email, the writing seems to turn out better.  I’ll write until my concentration goes—with luck, a few hours.  Then I might switch and work on edits on another part of the piece.  I might also do some drawing.

It’s a kind of grueling schedule, but I learned early on that if I don’t dive into long hours as soon as I’m cleared to start work on final paintings, I end up spending even longer hours in the final few weeks—sometimes 19 hours a day.  It’s not a very healthy way to live, but there never seems to be enough time in a deadline. 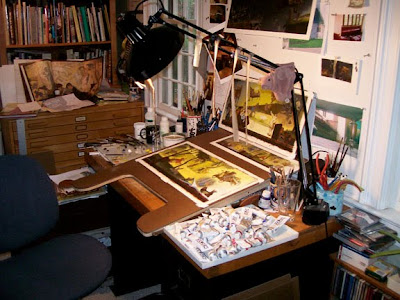 Close-up of my drawing table, from another angle.  The strips hanging from the lamp arm are Scotch tape, which I sometimes use as a frisket, to get clean, sharp edges on an object in the painting.

My favorite medium is acrylics.  They dry quickly, and since I do a lot of layering and glazing in my paintings, I can work up interesting textures and colors much more quickly than with oils. I’ve tried other media, but acrylics get me much closer to what I see in my head than anything else. 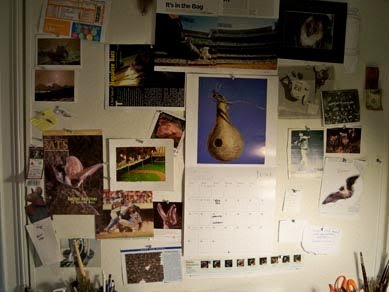 Bulletin board above my drawing table, showing some reference photos while I was working on Bats at the Ballgame.

As a “book person,” it’s very comforting to have a wall full of books nearby.  I’ve got some from childhood, some autographed ones, some art monographs, and research books on a lot of different subjects.  I also have a stained glass desk lamp I made in college, and some of my childhood toys, to remind me of how I saw the world then and what was important to me. 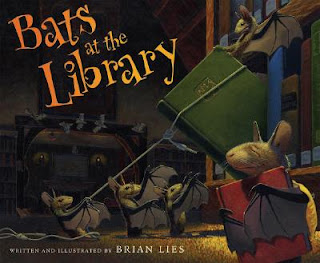 The most important part of writing or illustration is simply showing up regularly—getting yourself into the chair and starting to work.  Beyond that, I try to not ritualize anything.  It does help me, if I’m working on a book, to take one last wander through my office at night and get my head into a working space for the morning.  I might re-read a picture book manuscript or a section of a story that’s bothering me, or scrape down my glass palette and lay out the tubes of paint I know I’ll need if I’m planning to paint.  It just makes it easier to slip into work in the morning without a lot of preparation.

I always write my rough drafts on a yellow legal pad using a Dixon Ticonderoga #2 pencil.  But that feels like it’s less about ritual, and more about using the same tools so that the tools themselves kind of disappear, the way artwork on your walls disappears if you don’t move it around.  I don’t want to notice my tools—I want to focus completely on the story or drawing I’m doing. 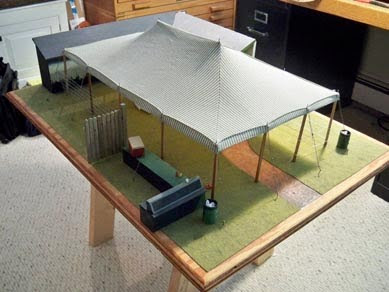 Model tent–built prior to illustrations for Bats at the Ballgame, as a meditative object while I was thinking about how the bats would use a tent as the site of their bat-ball game. 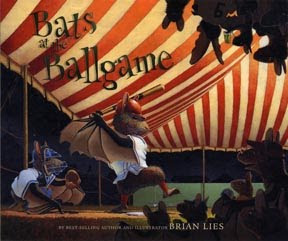 When I’m writing, I need silence, as absolute as possible.  That’s one reason for the early morning writing time—no one else is up, so everything’s quiet.  But when I illustrate, it helps me to listen to books on CD.  Radio makes me nervous; the regular scheduling makes me think, “Holy cow—another hour gone already??”  That said, though, while I was working on Bats at the Ballgame, I streamed BBC One out of St. Johns, Newfoundland on my computer.  They play great interviews and in-depth news stories, and I liked the quirkiness of hearing local news from someplace I haven’t been yet. 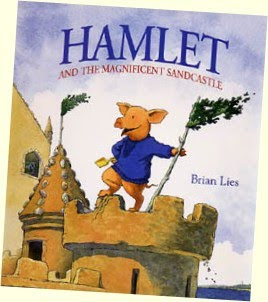 No snacks!  With four straight months of 14-hour workdays on a deadline, it’s hard to get any exercise.  Snacking would be terrible.  I usually have a glass of water nearby, but I need to make sure I keep it away from my acrylic rinse-water—I’ve washed brushes out in my drinking water by mistake.

At a certain point a story I’m working on becomes alive and creates its own momentum, and my curiosity to see how everything turns out keeps me going.  But a deadline is also a very powerful motivator when writing and illustrating are your only jobs.

I think the most challenging aspect of illustration is anticipating yet another deadline crunch.  Here we go again.  I enjoy the snail-pace drama of watching a book come to life, but I’m always aware of how many long weeks it’s going to take, and how much it’s going to keep me from my family and hobbies. 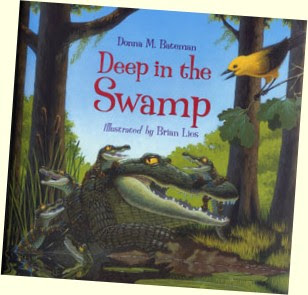 I’m a quick keyboarder, and I’ve found that if I compose on the computer, my rough drafts are terrible. So I slow myself down on purpose by writing everything out longhand.  I consider each sentence more as I write, and often change it as I go.  What ends up on the page is usually better than the sentence I’d first planned to write.

Because I work in both words and pictures, a story idea will often start out as a collection of small pieces—sketches in a sketchbook, and some sentences on the legal pad.  At first, I just dump whatever comes to me onto the page.  Then I’ll start to pull things together, working on whatever feels the most fruitful.  If I can’t get the words to work out right, I’ll switch to drawing, and that sometimes suggests words I hadn’t thought of before.  Same with drawing—sometimes the words will get me through a drawing dry spell.  Sometimes I’ll write a synopsis, and that will reveal what parts I’ve inadvertently left out.  Once I even wrote a Q & A “interview,” in which I answered questions about an unfinished work as though it had already been published.  It helped me figure out what I was really trying to say! 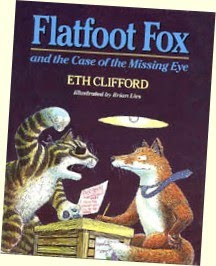 If I had to share my workspace with somebody, I’d share it with someone like N.C. Wyeth or John Singer Sargent.  It would be inspiring to have him nearby and I’d always try to do my best work, but he’d also be dead, so he wouldn’t interrupt my concentration.

I think the best advice I’ve heard was “Learn to draw!”  Some people think that strong drawing skills aren’t critical, but if you can’t draw well, no bag of tricks or computer software will allow you to create good illustrations.  A subset of that advice is to figure out the things that you’re the weakest at drawing, and practice those things until you’ve got them down.  A lot of people just avoid drawing those things, but then you spend a lot of time avoiding them and it can make your work stilted.