People, thank you for the warm response you’ve given this idea! This project is all about showcasing the diversity that can be found in books for teens today, and I think our first roundup does exactly that. I was surprised that I didn’t receive a single repeat suggestion–everyone suggested unique titles. Another testament to the variety of books being published today.

I hope I didn’t let any suggestions fall through my email cracks–If you contacted me and don’t see your title on this list, please contact me again so I can add it.

I’m already compiling the roundup for next Wednesday, so if you would like to recommend books for teenagers that you think most people would consider “light and round” please email me with your suggestion and links to reviews if you have them.

If you’ve reviewed one of the books mentioned today and would like your review to be linked in the archives up above, please email me with the link.

Also, coincidental to the timing of the recent “Is YA too dark?” conversations, but timely nonetheless, YA author Jennifer Ziegler wrote an excellent essay for Hunger Mountain on embracing her reputation as a writer of “light” fiction. I loved this line: “After all, it’s the sunshine that creates the shadows—not the other way around.”

Best Friends Forever by Beverly Patt, recommended by Rosanne Parry. “After her Japanese American friend, Dottie Masuoka, and her family have been sent to ‘Camp Harmony’ following the bombing of Pearl Harbor, fourteen-year-old Louise Krueger dedicates herself to keeping a journal that she will be able to share with her best friend when she returns. The items in the scrapbook—from newspaper clippings, to hair ribbons, to letters from Dottie—are beautifully illustrated within Best Friends Forever and are accompanied by both heartwarming and heartbreaking journal entries by Louise.”

Brain Jack by Brian Faulkner, submitted by Robin of robinreadsnwrites. “I liked the thriller feel to it; I loved the computer jargon.”

The Day Before by Lisa Schroeder, submitted by Robin of robinreadsnwrites. “The story and characters find their way into your heart as you read.”

Cinderella: Ninja Warrior by Maureen McGowan, recommended by Emily of Red House Books. “I have always loved Cinderella as a character. . . Now take that classic tale and turn said stepmother into a powerful evil magician, turn Cinderella into a kick ass ninja and replace the glass slipper and ball with more excitement (think actual true love and a magic completion). Win!”

The Fourth Wish by Elizabeth Varadan, reviewed by Michelle Fayard of Bird’s-Eye View. “While on their way to see a magic show, Melanie, Cory, Erin and Arthur help a stranger pick up the spilled contents of a shopping bag. What the four don’t realize is the stranger, who introduces herself as Mrs. Seraphina, is the one who really is magic.”

Good Enough by Paula Yoo, recommended by Christine. “A Korean-American girl whose parents are obsessed with her acceptance into HarvardYalePrinceton. Squeaky clean, light romance, very funny.”

Haunting Charles Dickens by Lewis Buzbee, recommended by Elizabeth Varadan. “Take an unexplained disappearance. Bring in a ghost who points the way. Add Charles Dickens, who knows London’s troubled neighborhoods only too well. Stir in a plucky, thirteen-year-old girl who will let nothing stop her from tailing a dangerous kidnapping gang. . .”

Hereville: How Mirka Got Her Sword by Barry Deutsch, recommended by Rosanne Parry. “A comic book about a troll-fighting 11-year-old Orthodox Jewish girl.”

Mind Blind by Jennifer Roy, recommended by Rebecca from The Reading List. “Nathaniel is fourteen years old, enjoys video games and The Amazing Race, and plays keyboards in a band with his best friend and the girl he adores. He is also a homeschooled university graduate, very skilled at mathematics, and has Asperger syndome. . . . Thoughtful, humourous, illuminating, and highly recommended.”

The Mozart Season by Virginia Euwer Wolff, recommended by Rosanne Parry. “Allegra Shapiro decides to enter a prestigious competition for young musicians, but ends up spending the summer doing more than practicing the violin. She learns important lessons about her family and herself, in this novel by the author of the National Book Award-winning True Believer.”

My Most Excellent Year by Steve Kluger, recomended by Kerry Mockler of The Moving Castle. “Normally, I am not very sentimental, and my preferences tend to veer away from romance-driven plots, or any book featuring adorable small children. But somehow, Kluger’s book (which is about both romance and an adorable small child) just worked for me. It is delightful. It was a joy to read. At one point, fairly late in the book, I had to go get some food; as I set the book down, I said [out loud, to an empty room] ‘I love these people!’ ”

How Not to be Popular by Jennifer Ziegler. “Maggie and Jack’s relationship rings true, adding an irresistible sincerity to both characters that allows Maggie’s self-discovery and growth to unfold naturally. Thoughtful and fun.”— Kirkus Reviews

Okay for Now by Gary Schmidt, suggested by Suzanne Morrone. “I actually read it because my 21 year old grandson recommended it. I had a few second thoughts [about recommending it for this list] since there is an abusive father and cancer both as part of the story. It is so uplifting, though, and the message to me was so positive.”

The Opposite of Invisible by Liz Gallagher, recommended by Roseanne Parry. “In a bright debut novel set against the lively backdrop of Seattle, Alice must learn the difference between love and a crush, and what it means to be yourself when you’re not sure who that is yet.”

Possibilities of Sainthood by Donna Fritas, recommended by Roseanne Parry.  “Antonia Lucia Labella has two secrets: at fifteen, she’s still waiting for her first kiss, and she wants to be a saint. An official one.”

The Pull of Gravity by Gae Polishner, recommended by Emily of Red House Books. “I absolutely loved the interconnectedness of this story. So many great little pieces all fitting together in just the right way. Family love and loss, unfaltering friendship, first loves, dying wishes, Star Wars and Steinbeck. Everything fit perfectly!”

The Running Dream by Wendelin Van Draanen, recommended by Abby the Librarian. “If I were to describe this book in one word, it would be “uplifting”.  Jessica’s story is one of hope, of friends and family coming together to help, and of possibilities.  It’s about small victories and large victories and making the world a better place.”

Sass and Serendipity by Jennifer Ziegler. “This book is a tribute to two women: Jane Austen and my sister, Amanda.”

Second Fiddle by Rosanne Parry. “If we had known it would eventually involve the KGB, the French National Police, and the Supreme Allied Commander in Europe, we would have left that body in the river and called the Polizei like any normal German citizen; but we were Americans and addicted to solving other people’s problems, so naturally, we got involved.”

Science Fair Season: Twelve Kids, A Robot Named Scorch . . . and What it Takes to Win by Judy Dutton, recommended by Abby the Librarian. “Judy Dutton interviews eleven competitors with projects ranging from nuclear reactors to equine therapy programs to solar-powered heaters constructed from old car radiators and soda cans. Their stories will move and impress you – these are teens who are changing the face of science as we know it!”

Semester in the Life of a Garbage Bag by Gordon Korman, recommended by Kerry Mockler of The Moving Castle. “The funniest book I have ever read.”

Sleeping Beauty: Vampire Slayer by Maureen McGowan, suggested by Emily of Red House Books.  “Vampires are cool if done right and while the vampires in this story aren’t the blood thirsty ruthless killers that vampires are suppose to be 🙂 they are still pretty darn cool.”

The Six Rules of Maybe by Deb Caletti and Stealing Heaven by Elizabeth Scott, recommended by Kate of Author2Author. “I grew up near the beach so I have lots of teen beach memories, which translates to ideas about beach books. I fully expect to write one someday, although my beach ideas haven’t made it to the top of the queue yet. In the meantime, here are some beach books I read recently that made me feel less homesick.”

Steinbeck’s Ghost by Lewis Buzbee, recommended by Elizabeth Varadan. “Reminded me all over again how much I love libraries, books, and John Steinbeck (not necessarily in that order). Buzbee captures that feel of how an author can send you to another world. . .” 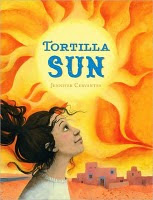 Tortilla Sun by Jennifer Cervantes, recommended by Elizabeth Varadan. “Tortilla Sun is a beautiful story of a young girl’s search for wisdom and truth and her discovery of her culture. The book moves at a leisurely pace that gathers in momentum and mystery with a touch of magic. The characters are richly drawn and the village blossoms with life. Izzy is a sympathetic protagonist, entirely believable.” 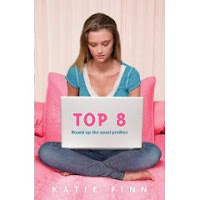 Top 8 by Katie Finn, submitted by Meg of Meg Writes! “. . . light and highly entertaining look at life for high school junior Madison MacDonald, a whip-smart girl with a bevy of close friends and a gorgeous new boyfriend, Jason. Fresh from a vacation in the Galapagos Islands, Madison returns stateside only to discover someone has hacked into her Friendverse (read: Facebook, MySpace) profile and completely changed her profile. And broken up with her boyfriend. And said terrible things to her ‘friends,’ who promptly unfriend and alienate her.”

What I Saw, and How I Lied by Judy Blundell, recommended by Teacherdance. “It’s an excellent mystery, showing well the challenges of a young girl growing up and discovering the realities of her family life as well as that which is most important in life.”

Will Grayson, Will Grayson by John Green and David Levithan, recommended by Katherine. “Two Will Graysons? How can this be? One night in Chicago Will Grayson and Will Grayson find out when they find each other. . . And both end up with  roles to play in producing the first one hundred percent fabulously gay high school musical.”

7 Responses to “Roundup #1! (Light and Round Project)”