Welcome to the (now monthly) roundup of the Light and Round Project! I’m squeaking this one in the last gasps of August. Phew!

I’m now gathering recommendations for September’s list! Please email suggestions (and links to your reviews if you have them) to me at fromthemixedupfiles (at) gmail (dot) com. These would be books geared for teenagers that you think the average person would consider not too violent, dark, or edgy.

Here are the August recommendations:

A la Carte by Tanita Davis, recommended by Ebony Elizabeth Thomas, Assistant Professor at Wayne State University. “Seventeen-year-old Lainey dreams of becoming a world famous chef one day and maybe even having her own cooking show. (Do you know how many African American female chefs there aren’t? And how many vegetarian chefs have their own shows? The field is wide open for stardom!) But when her best friend—and secret crush—suddenly leaves town, Lainey finds herself alone in the kitchen. With a little help from Saint Julia (Child, of course), Lainey finds solace in her cooking as she comes to terms with the past and begins a new recipe for the future.”

Anna and the French Kiss by Stephanie Perkins, recommended by Judith Ridge, Western Sydney Young People’s Literature Officer. “Anna is looking forward to her senior year in Atlanta, where she has a great job, a loyal best friend, and a crush on the verge of becoming more. Which is why she is less than thrilled about being shipped off to boarding school in Paris – until she meets Etienne St. Clair: perfect, Parisian (and English and American, which makes for a swoon-worthy accent), and utterly irresistible. The only problem is that he’s taken, and Anna might be, too, if anything comes of her almost-relationship back home.”

As Easy As Falling Off the Face of the Earth by Lynn Rae Perkins, recommended by Monica Edinger of Educating Alice. “It’s summer vacation and 15-year-old Ry is on a train headed west to archaeology camp while his parents sail the Caribbean in their boat and his grandfather keeps an eye on the dogs in their new home. Or not. For as the story begins, Ry, having walked away from the stalled train to make a quick cellphone call, watches as it leaves without him — stranding him in the “strange eroded hills” of Montana and on a whole new path.”

Criss Cross by Lynn Rae Perkins, recommended by Monica Edinger of Educating Alice. “As the title and caption imply, this story reads like a series of intersecting vignettes–all focused on 14-year-old Debbie and her friends as they leave childhood behind.”

Dash and Lily’s Book of Dares by David Levithan and Rachel Cohn, recommended by Judith Ridge, Western Sydney Young People’s Literature Officer. “ ‘I’ve left some clues for you. If you want them, turn the page. If you don’t, put the book back on the shelf, please.’ So begins the latest whirlwind romance from the New York Times bestselling authors of Nick & Norah’s Infinite Playlist. Lily has left a red notebook full of challenges on a favorite bookstore shelf, waiting for just the right guy to come along and accept its dares. But is Dash that right guy? Or are Dash and Lily only destined to trade dares, dreams, and desires in the notebook they pass back and forth at locations across New York?”

Flipped by Wendelin Van Draneen, recommended by Jen Simms. “The first time she saw him, she flipped. The first time he saw her, he ran. That was the second grade, but not much has changed by the seventh. She says: ‘My Bryce. Still walking around with my first kiss.’ He says: ‘It’s been six years of strategic avoidance and social discomfort.’ But in the eighth grade everything gets turned upside down. And just as he’s thinking there’s more to her than meets the eye, she’s thinking that he’s not quite all he seemed.”

Flygirl by Sherri L. Smith. (My recommendation.) “All Ida Mae Jones wants to do is fly. Her daddy was a pilot, and years after his death she feels closest to him when she’s in the air. But as a young black woman in 1940s Louisiana, she knows the sky is off limits to her, until America enters World War II, and the Army forms the WASP – Women Airforce Service Pilots. Ida has a chance to fulfill her dream if she’s willing to use her light skin to pass as a white girl. She wants to fly more than anything, but Ida soon learns that denying one’s self and family is a heavy burden, and ultimately it’s not what you do but who you are that’s most important.”

48 Shades of Brown by Nick Earls, recommended by Judith Ridge, Western Sydney Young People’s Literature Officer. “Australian teenager Dan Bancroft had a choice to make: go to Geneva with his parents for a year, or move into a house with his bass-playing aunt Jacq and her friend Naomi. He chose Jacq’s place, and his life will never be the same. This action-packed and laugh-out-loud-funny novel navigates Dan’s chaotic world of calculus, roommates, birds, and love.”

Gender Blender by Blake Nelson, recommended by Sharon Levin. Sharon is well known for giving booktalks to young readers and notes that this is her “cheat” booktalk. She says, “With everything else I use my own words, for Gender Blender, I only need to use the jacket copy and the kids are instantly interested.” Bet you’re curious about that jacket copy now, right? All right, here you go: “Emma: Wants Jeff Matthews to notice her. Hates sexist boys. Wonders when she’ll get her period. Tom: Must avoid looking like a wuss. Must deal with his blended family. Must get a chance with Kelly A. Then something freaky happens: Emma and Tom switch bodies. And until they can find a remedy: Emma: Can’t believe she has a . . . thingie. Hates mean girls. Finds out secondhand that her period has arrived. Tom: Must learn to put on a bra. Must deal with an overachieving family. Must not be alone with Jeff Matthews.”

Heist Society by Ally Carter, recommended by Julie Dahlhauser, librarian at Haywood High School.  “It’s deliciously escapist, with beautiful, rich, clever people and gorgeous locales. There are villains and peril and adventures, but it’s all so much fun. Sort of Ocean’s Eleven for teens.” 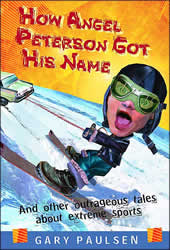 How Angel Peterson Got His Name by Gary Paulsen, recommended by Sharon Levin. “Paulsen accounts for his 13th year ‘of wonderful madness’ when he and his friends tried to shoot a waterfall in a barrel, break the world record for speed on skis, hang glide with an Army surplus parachute, and perform other daredevilish stunts. Readers will be drawn to the term “extreme sports” but the story is more accurately one generation’s version of homemade fun in the days following the Korean War when ‘radio was king’ and the great outdoors served as the playground.” 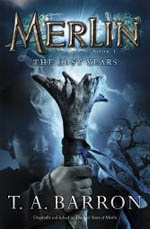 Lost Years of Merlin series by T. A. Barron, recommended by Elizabeth Varadan. “There has never been a magic like Merlin’s, and T. A. Barron reveals how the legend was born in his adventure-loving five-book epic featuring the heroic young wizard and his unforgettable band.” 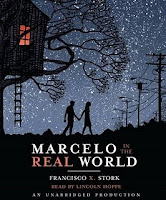 Marcelo in the Real World by Francisco Stork, recommended by Ebony Elizabeth Thomas, Assistant Professor at Wayne State University. “A love story and legal drama that received five starred reviews and multiple honors. . . . Reminiscent of The Curious Incident of the Dog in the Night-Time in the intensity and purity of its voice, this extraordinary novel is a love story, a legal drama, and a celebration of the music each of us hears inside.”

Sequins, Secrets, and Silver Linings by Sophia Bennett, recommended by Trisha of The YA YA YAs. “If you’re looking for something light and fun, substantial enough that it won’t be quickly forgotten or feel disposable without being heavy, and is simply a huge pleasure to read, I highly recommend this. It’s the closest thing to Steve Kluger’s My Most Excellent Year that I’ve read since My Most Excellent Year.”

Stuff by Jeremy Strong. “Stuff is the nickname of our hero, Simon (because he knows a lot of weird stuff). Stuff’s parents have split up, and his dad has brought back a new step-mum (the Sherry Trifle), a step-sister (the awful Natasha) and a radical feminist rabbit called Pankhurst (she only attacks men – spooky). In Stuff’s own words, here is how he tries (and fails) to run away from home. How he tries to get off with the beautiful Sky, and dump girlfriend Delfine (without being beaten up by her psycho brother). In fact, how to get through life as a teenage boy.”

Suite Scarlett by Maureen Johnson. (My recommendation.) “Scarlett Martin has grown up in a most unusual way. Her family owns the Hopewell, a small hotel in the heart of New York City. Her nineteen-year-old brother, Spencer, is an out of work actor facing a family deadline to get his career in order. Eighteen-year-old Lola has the delicate looks of a model, the practical nature of a nurse, and a wealthy society boyfriend. Eleven-year-old Marlene is the family terror with a tragic past. When the Martins turn fifteen, they are each expected to take over the care of a suite in the once elegant, now shabby Art Deco hotel. For Scarlett’s fifteenth birthday, she gets both a room called the Empire Suite, and a permanent guest named Mrs. Amberson. Scarlett doesn’t quite know what to make of this C-list starlet, world traveler, and aspiring autobiographer who wants to take over her life. And when she meets Eric, an astonishingly gorgeous actor who has just moved to the city, her summer takes a second unexpected turn.”

Ten Miles Past Normal by Frances O’Roark Dowell, recommended by Trisha of The YA YA YAs. “When Janie was nine, she thought it would be fun to live on a farm and raise goats, and told her parents so. Of all ideas for her parents to take seriously, why did it have to be this? Okay, the goat farm was fun for a couple of years. Until Janie started high school and the goats became a huge source of embarrassment. There was the hay in her hair incident, the rash on her legs, and, most recently, the goat poop on her shoe that stunk up the entire school bus. All Janie wants now is to be normal.”

The Wee Free Men by Terry Pratchett, recommended by Janice Del Negro. “Still makes me laugh out loud, even after repeated readings.” From the publisher: “A nightmarish danger threatens from the other side of reality . . . Armed with only a frying pan and her common sense, young witch-to-be Tiffany Aching must defend her home against the monsters of Fairyland. Luckily she has some very unusual help: the local Nac Mac Feegle—aka the Wee Free Men—a clan of fierce, sheep-stealing, sword-wielding, six-inch-high blue men. Together they must face headless horsemen, ferocious grimhounds, terrifying dreams come true, and ultimately the sinister Queen of the Elves herself. . . .“

2 Responses to “Light and Round Project Picks for August”