This interview originally ran in June of 2010. Janet’s second YA novel, Forgiven, was published in 2011 and her third novel, Sirens, was published in fall of last year. To win an advanced reader copy of her first novel, Faithful, leave a comment on this post.

Congratulations, Veronica! You are the winner of the advanced reader copy of FAITHFUL! Please email me with your mailing address and I will send it out to you. 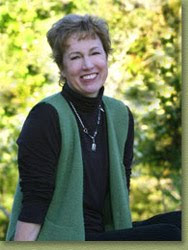 This week we’re stepping inside the workspace of writer Janet Fox. Janet’s debut young adult novel Faithful was published in May of this year. Her novel is one of the 2010 debuts I’ve been most looking forward to reading, and I must not be alone in thinking that because I’ve been on my library’s waiting list for the book since it was published a month and a half ago! The good news is I’m next in line; the bad news is I can’t offer you my personal take on it. But I thought this description from the Class of 2K10 website made it sound particularly intriguing:

Faithful, the story of 16-year-old Maggie Bennet, is a tale of romance and mystery set in 1904 in spectacular Yellowstone National Park.

In 1904 Margaret Bennet has it all – money, position, and an elegant family home in Newport, Rhode Island. But just as she is to enter society, her mother ruins everything, first with public displays, and finally by disappearing. Maggie’s confusion and loss are compounded when her father drags her to Yellowstone National Park, where he informs her that they will remain. At first Maggie’s only desire is to return to Newport. But the mystical beauty of the Yellowstone landscape, and the presence of young Tom Rowland, a boy unlike the others she has known, conspire to change Maggie from a spoiled girl willing to be constrained by society to a free-thinking and brave young woman living in a romantic landscape at the threshold of a new century.

Here is a great review of Faithful and interview with Janet Fox here. An interview of Janet with Cynthia Leitich Smith can be found here. And I also came across this trailer for Faithful:

I mentioned already the Class of 2K10–Janet is a member of this group of some of the 2010 debut authors of middle grade and young adult fiction. But Faithful isn’t Janet’s first published work. She’s also published a handbook for students titled Get Organized Without Losing It, as well as stories and articles in magazines. She lives with her husband, son, and Basset hound in Texas and spends her summers in Montana. If you’d like to learn more about Janet Fox, she has a great website with links to her blog, articles on writing, tips for organizing and more. 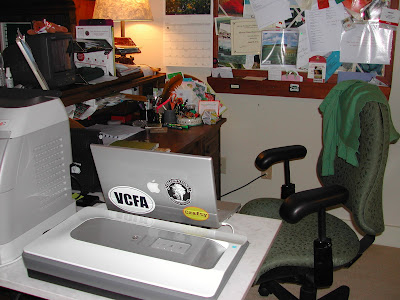 I have a small office right now – but it’s snug and friendly. It sits right off the kitchen. I have tons of bookshelves. And some open spreading-out space on tabletops. I work at an old roll-top desk that my husband bought me when we got married. I never roll the top down – it’s always in use! My computer sits at an angle on a marble slab resting on an antique sewing machine base. If I could change one thing about my office, I’d give myself more wall space, because I like to hang up long charts of time-lines and plot-lines and maps. I’m so lucky. I can write almost every morning. I get up and exercise, and I’m at my desk by 9. I scan email to put out any fires, then I get to work. I write (or revise) until lunch, take a little nap after lunch, and work again until about 4. I deal with email until dinner. Sometimes I work in the evening if I really want to stretch, and if I don’t have to blog or attend to something else. It’s heaven. 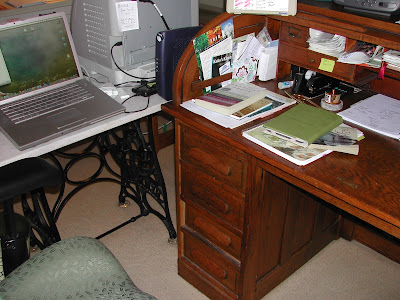 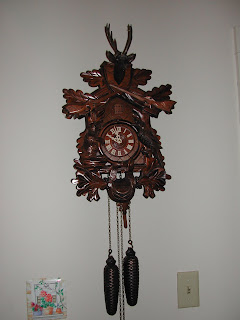 My cuckoo clock, my chair, and my big bulletin board. My cuckoo clock is my companion. It’s a lovely wooden Swiss clock, with a deer and rabbit and bird carved on the front, and my friendly cuckoo to chime the hours. Most of the time I don’t hear it; but it’s a bit of whimsy. My chair was one I bought when I began writing full time. It’s a big, clunky office chair in my favorite green color. It swivels and leans and supports me just right. And my bulletin board is like a picture view of my mind. It’s not newsy – it’s photos of plants that I took years ago, mingled with drawings my son made at 8, and old postcards (on one with a bicycle: “Ride a Stearns and be content” – if only!) and cartoons and poems, all layered one on top of another. 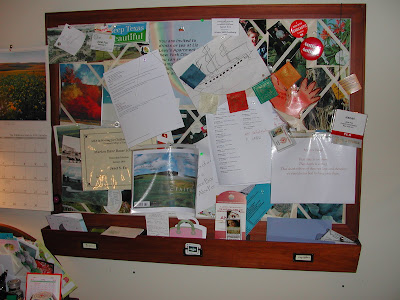 Coffee. Two cups of cappuccino, each drunk slowly, before noon. I write two pages and then take a break, even if it’s just to walk out of the room and back. My postprandial nap. 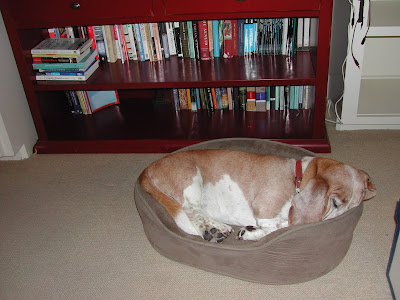 Nothing. I cannot listen to anything, not music, not news, not anything. Only my ticking cuckoo clock. Otherwise I need complete silence. I’ve tried music – I wish I could listen – but, nope.

My coffee in the morning. Sometimes in the afternoon I’ll have a cup of green tea. Occasionally I’ll have dark chocolate. Yum.

If the story doesn’t keep me focused, I’m in trouble. That’s usually the first sign of trouble, actually – that my mind is wandering to the mail or the laundry, or what is the dog up to? What’s that noise outside? Then I know my story isn’t working. 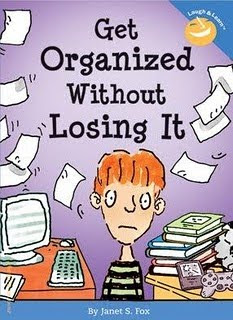 Computer. I type almost as fast as I think, and my writing has slowed down. And my computer is a Macbook (picture me giving it a big kiss.) I love my Mac.

It has changed and I don’t doubt will continue to evolve. Generally I’m an organic writer – that is, I shoot from the hip and make sense of it all later. But this is problematic and can lead to disaster halfway through a project. So lately I’ve taken to beginning organically and letting the muse take me wherever, and then, just as I’m about to hit the wall, set up a plot chart and start scene-building, but in a free-form kind of way. If I know the ending I can generally make the middle work. Charts are really important to me. My next office will have huge wall space for charts.

Living? Laurie Halse Anderson. I love her work. Dead? Charles Dickens. I’d be pestering him all the time. “So, Charlie, what would you think if…” “Charlie, I had this idea, and…” “Charlie, how can I make this scene faster/more nuanced/funnier…”

Linda Sue Park: “Read, read, read.” If you want to be a writer, you have to be a reader. There are no shortcuts to this.