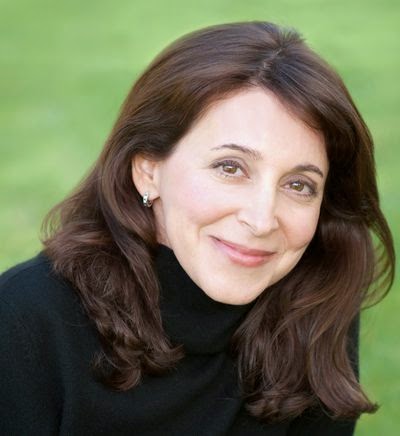 Alphabet Trucks is a rhyming, alphabet story about 26 different trucks and how they serve their communities. Alphabet Trains (Charlesbridge) will be published in 2015. 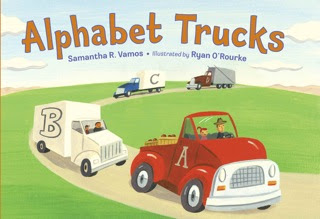 The Cazuela That the Farm Maiden Stirred won a Pura Belpré Illustration Honor and starred reviews from Kirkus and School Library Journal.

Samantha attended Georgetown University Law Center and practiced law in Washington, D.C. and Chicago. She is a mom, dog-lover, latte addict, and incurable chocoholic. To learn more about her, please visit http://www.samanthavamos.com. 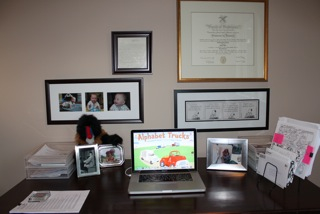 We have a spare bedroom that we use as an office.  My husband generously encouraged me to claim it (seconds after thanking him, I was lugging in boxes).  To the left of my desk is a large bulletin board covered with writing mementos (most importantly for me, photos of my family, inspiring letters from my mom, my agent, close friends, and Charlesbridge Publishing–the publisher of three of my four children’s picture books). 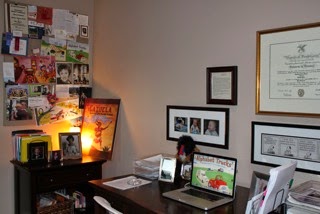 My desk faces a wall.  Hanging on that wall is my law school diploma, a cartoon, a letter from my grandfather, and photos of my son when he was a baby.
On top of my desk are my computer, framed photos of my family, four letter trays, and a file sorter full of writing.  My office is a continuous mess.  Although our home is typically fairly well organized, my office is the repository for all family, school, and home-related documents as well as innumerable “to do” items.  I create piles behind me so I don’t see them when writing! 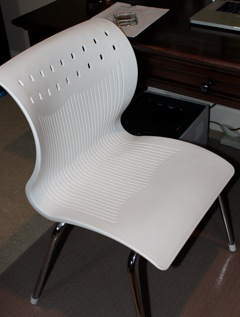 I have a rectangular, wooden desk and a white, molded plastic chair that I purchased from a restaurant that was going out of business. The chair reminds me of ones I’ve seen in Crate and Barrel catalogues. This chair, however, cost a mere $10 cash.  I bought a few for our kitchen and one ended up in my office.  I like its design, but more importantly, it’s surprisingly comfortable.

All workdays commence with coffee and breakfast (my favorite meal).  Once my son is off to school and our dog has been outside and has resumed napping (she’s 12.5 years old), I usually deal with family and home-related issues (bills, scheduling, chores).  I prioritize the domestic work in order to eliminate excuses I could manufacture to remain seated in my office and write. There are some days that I devote entirely to writing and editing, and there are other days that I commit to marketing/promotion of past, present, and future work. I really enjoy the creative aspects of promotion.

To directly answer the question, however, no day seems typical.  My writing is structured around my son’s schedule and needs.  If there’s a good block of time for a few days in a row, I work on longer manuscripts.  If my window is only a few hours, I work on shorter stories or sections within a manuscript.

I’ve been writing for thirty years, but it’s only been the last six years during which I’ve had the ability to work for blocks of time during the day.  My mom died two years ago and between grieving and acting as executor, my writing schedule became erratic.  That time was painful, yet in some ways instructive and I have since tried to focus my thoughts and energy in different ways than I had before.  With respect to writing, however, my experience during the last two years revealed that writing on a consistent basis and schedule is a necessary exercise in order for my work to improve and for me to be productive.  Even if it’s for two hours each day, I need to maintain that writing habit as consistently as possible.
List three of your most favorite things in your workspace and why they are meaningful.

1. After proposing, my husband gave me what he described as a “pre-wedding present”–a framed Peanuts cartoon by Charles Schulz.  I have loved Snoopy since I was little, and for many years, the same cartoon was taped to my refrigerator.  The text summed up my feelings during the many years I was submitting manuscripts and receiving innumerable rejections.  The last line, “Didn’t you realize that?” always makes me smile.
The scene:  Snoopy is sitting atop his doghouse, hunting and pecking on the typewriter, composing a letter to whom I presume is a publishing house.  Snoopy’s monologue:
“Gentlemen, Regarding the recent rejection slip you sent me.
I think there must have been a misunderstanding.
What I really wanted was for you to publish my story, and send me fifty thousand dollars.
Didn’t you realize that?”

I often glance at the cartoon.  The text has essentially seeped into my subconscious. The fact that my husband gave it to me reinforced the fact that he understood how much writing meant to me.  He gets it and for that fact alone, I feel extremely lucky.

2. A framed letter from my grandfather.  In 1986, my first semester of law school was far more difficult than I had anticipated and I hadn’t quite gotten the hang of it all yet.  Hoping to encourage and inspire me, my grandfather typed a letter (he felt his handwriting was indecipherable).  His words are original, inspiring, entertaining, and revealing of the unique person he was.
3. Photographs of my mother.  My mother was my greatest source of support and encouragement about my writing, dreams, and goals.  She was my reader, my friend, the best mother I could have, and the most courageous woman I’ve ever known.  Thoughts of her inspire me in different ways and I am comforted seeing her photos around my office. 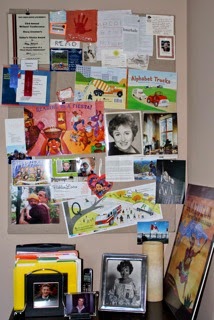 I almost always eat chocolate when writing.
What do you listen to while you work?

As crazy as the following statement may sound, I have found that the genre I write dictates the music.  When I’m working on my novel (adult commercial fiction), I tend to listen to female artists (Alicia Keys, Adele, Sheryl Crow, Cory Lee, Amy Winehouse, Diana Krall, Lady GaGa, Rihanna, Madonna, Carrie Underwood, Alison Krauss, Katharine McPhee, Taylor Swift), which is not surprising as the protagonist is female.
When I’m writing children’s stories, I rarely play music because I find the lyrics distracting and I often try speaking what I’ve written to hear how my words sound aloud.
What is your drink and/or snack of choice while you’re working? 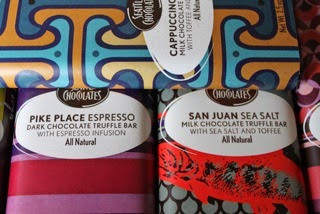 I’m a Virgo so let me be specific (ha!):  a dark roast coffee latte with 2 percent milk and a generous sprinkling of cinnamon.  I’d never turn down a soy latte.  In terms of snack, there’s only one:  chocolate.  I’m a confessed chocoholic.  I will never be a recovering chocoholic.  I thoroughly accept, relish, and appreciate the addiction (if I was drafting a Chocoholics Anonymous Pledge – that might be it).  For decades, my number one favorite was a York Peppermint Pattie.  Recently, however (and somewhat unfortunately because they’re not inexpensive), in addition to the Peppermint Pattie, I’ve become a fan of Seattle Chocolates’ Pike Place Espresso Truffle Bar.  A local store had a sale on a variety of the truffle bar flavors and I bought a lot.  I sent a number to family and friends (but also managed to eat two bars while working on a new manuscript).
Full disclosure: I ate a Peppermint Pattie while answering these questions.
What keeps you focused while you’re working?

A good story and a connection to the work.  If I’m really involved with my work, I feel as if I’m literally inside the fictional walls of the writing. It’s as if the words surround me.
Do you write longhand, on a computer, or another way?

I utilize a computer.  Before I had a computer, I wrote via typewriter.  Generally, I only print a manuscript when I’ve reached a block in my writing.  When that occurs, I typically carry the manuscript with me everywhere as I like to have the current draft available for review. I have made edits to my work while in aisles of grocery stores, during my son’s karate class, and on a picnic table in a park after walking my dog.  My mind plays with a concept or word arrangement and if I especially like a line, I want to record it fairly immediately. 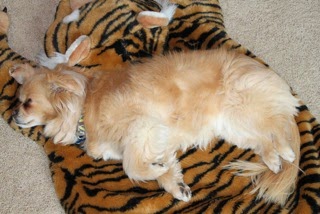 I enjoy writing rhyme, but it’s never quick or easy for me.  For that reason, when I’m writing a rhyming manuscript, I carry printed drafts of the manuscript for weeks and often months.  I’ll walk around trying out different lines or endings until the couplets I’m writing improve.  After writing an initial draft of Alphabet Trucks, my son and I were on a highway and passed a truck featured in the manuscript.  I began reciting that alphabetical section of the manuscript and my son, knowing that I carry drafts with me, found the manuscript in my purse and read along.  Hearing him read the draft helped me correct a line.  I pulled over at the next exit and jotted down edits.

I develop a lot of threads, but I’m not always able to stitch them together.  The thread of an idea will come to me and when possible, I sit down and start writing.  While in law school, I wrote outlines and they were helpful for studying.  In my capacity as a fiction writer, however, I’ve not found outlines to be the most successful technique. My writing sounds more stilted when I outline.  I love discovering where my story leads me.  That’s probably one of the most exciting aspects of the writing exercise for me – I get a little charge out of the anticipation.
If you were forced to share your workspace but could share it with anyone of your choosing, who would it be?

My son just to have him near me, but I probably wouldn’t accomplish much!

I could share space with my husband because is very focused when working.  He “guts it out” (his phrase) and gets the work done.
What is the best piece of writing advice you’ve heard or received?

In terms of technique, the best piece of writing advice I’ve received is “show, don’t tell.” In terms of overall writing advice, I’d go with Nike’s phenomenally useful slogan, “Just do it.”  I’ve thought this sentiment quite often:  You’ll never know until you write it so just do it.