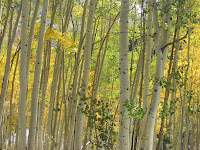 Halloween weekend I attended the Big Sur in the Rockies writing workshop organized by Andrea Brown of the Andrea Brown Literary Agency and our local SCBWI. It was fantastic. Fantastic! And exactly what I needed for my writing at this moment in time. It was a weekend of total immersion in my work-in-progress. I got so lost in thinking about my story and characters that at one point, in casual conversation, someone referenced a big current event that was going on and I drew a complete blank about what they could be talking about (rhymes with “residential detection”).

The weekend workshop was modeled after the annual one that Andrea Brown runs in Big Sur, California. They keep it small so there is a good ratio of attendees to faculty. On the faculty were: Marilyn Mark, editor with Marshall Cavendish; Lyron Bennett, editor with Sourcebooks Jabberwocky; and local children’s/YA authors Lynda Sandoval, Laura Backes, Linda Arms White, Claudia Mills, Phyllis Perry, Hilari Bell, and Paul Hindman. The conference began Friday night, went from 9-9 on Saturday, and ended Sunday around 1.

The way the Big Sur conference works is you are assigned two different critique groups that each meet twice. The critique group is led by one of the faculty members. You have twenty minutes in the group to read about 5 pages of your writing and have everyone discuss it. You also are assigned a one-on-one meeting with one of the faculty members to discuss the first page of work you submitted. There’s a chunk of time set aside for revising Saturday afternoon. I also went home Friday night and wrote until 1am, then got up at 6am to write some more. By Saturday night I was pooped but I still managed to write for an extra hour once I got home.

I had the good fortune of being placed in groups with Marilyn Mark and Andrea Brown. I found it to be incredibly valuable to be able to listen to both an editor and an agent’s take on a variety of writing samples. If you think about it, these groupings of writers are a good sampling of the slush pile (I’m assuming we were all unagented—could be wrong about that) so sitting there listening to an editor and agent’s off-the-cuff feedback on not just my writing but a wide range of writing is probably about as close as you can get to being a fly on the wall of their office as they filter through the slush. Actually, it’s probably much better since in reality I would guess a fly on their wall would only hear the rustling of paper and the occasional mutter. Unless they’re in the habit of elucidating their thoughts to flies. Which seems kind of appropriate for a children’s book editor, doesn’t it? Charlotte’s Web but instead of Fern and Wilbur it’s the editor and the fly?

Andrea mentioned to our group that one negative trend she was noticing in the writing she was hearing that weekend was too many adults in the storylines. The stories were too adult-centric and her point was that kids and teens want to read about kids and teens, not adults. The funny part here was that she told us this before anyone shared their writing, and as we went around the circle we all had adults as secondary characters in the excerpts we were sharing. (Well, one person’s characters were elves and a cat so that was an exception.) I personally cringed when she talked about this trend because the chapter I had brought to share featured my 13-year-old main character and . . . three adults. Gulp. Way to make a first impression, right? But this led to a really interesting discussion about adult characters in children’s fiction, one that I continue to ponder because my story does have a lot of supporting adult characters.

Andrea referred to Harry Potter as an excellent example of a child-centered story. I agree with her because Harry, Ron, and Hermione are certainly the stars. They move the plot forward by the choices they make and the actions they take, they find their own way in and out of predicaments, and they are the ones that ultimately uncover and solve the mysteries and save the day. Not to mention the books are chock full of delicious details that would intrigue young (and older) readers–and not just the details of the magical world they inhabit, but also details about activities that resonate in most children’s lives like school life, a competitive sport, and relationships with classmates. But! There are adult characters in Harry Potter. There are A LOT of adult characters in Harry Potter. (There are a lot of characters, period.) And furthermore, if you removed the adult characters from the story, the story completely falls apart. Also, some of the characters that many kids love best (Hagrid, for example) are adults.

Based on our discussion, this is how I would summarize her advice: If you can tell your story without any adult characters, do it. If your story won’t work without them, keep the focus as much as you can on the children and make sure they solve all the problems themselves.

I would also add to that, just from my own thinking about this, the adults in Harry Potter work in having kid appeal in part because they are some combination of A) an obstacle to Harry and it’s easy for children to identify with adults being an obstacle B) they’re humorous, like the Dursleys C) they are quite childlike themselves, like Hagrid and his love for animals that often gets him into trouble, or Mr. Weasly and his childlike fascination with muggles. And then in the case of Voldemort, having the ultimate villain be an adult only increases Harry’s stature as a hero. That he is the only one capable of defeating this powerful and evil leader—something not even the great Dumbledore could do–is pretty empowering to a child reader.

In honor of Banned Books Week, here is a quiz. Be warned, the questions aren’t for the casual reader, but it covers some interesting book trivia. I scored a 7 out of 13 which I thought was decent considering I guessed on several. But along with my score came a snarky analysis that suggested I may be near-illiterate and probably am a fan of Sarah Palin. Ouch.

1. Well, I’ll be! There’s someone checking in on this blog. (I’m guessing. . . Mom?) So a high five to anonymous for the push on the tush to stop neglecting this space.

2. I just saw a sneak peak of my friend Rachel’s second picture book Building on Nature: The Life of Antoni Gaudi, (out next spring I believe). Beautiful! Beautiful, beautiful. I am so excited for her. It is going to be another gorgeous book. Her first book Through Georgia’s Eyes is a real gem. It’s the story of the life of Georgia O’Keeffe. Rachel has a knack for telling these artists’ stories in a simple and poetic fashion. It’s the type of writing that looks deceptively easy, but it takes a lot of work to write in a way that reads that effortlessly. The illustrations in both books are fantastic, done by Julie Paschkis. I can’t wait to buy an actual copy of this Gaudi book once it’s out.

3. A round of high fives to the Kite Tales staff and all the contributing writers and illustrators for this latest issue, now available online. This issue has a fall conference theme for the upcoming Rocky Mountain chapter of SCBWI’s Letters & Lines conference, which will be going on next weekend. But I think a lot, if not all, of the articles and info would be of interest to people not attending the conference as well. There is a profile on volunteer extraordinaire Carrie Seidel, a blog spotlight on Cheryl Reifsnyder, a QA with writer and illustrator Danlyn Iantorno, member’s tips on getting the most out of attending conferences, a round-up article on the NY-SCBWI conference. . . a lot of good stuff. Beautifully designed by Joyce Turley and illustrations by Karen Windness.

4. I’m giving a high five to homegrown, fresh fruit and vegetables. They really do taste so much better when they come straight out of your yard. We have boysenberries growing along our back fence and for the last couple of weeks we’ve been picking big bowlfuls. They are delicious. Some tangy, some sweet. My husband and I have talked about using some to make maybe a boysenberry pie or jam, but as we’re discussing our grand plans we eat through the whole bowl. They are just SO good. Our veggie garden is overrun with tomatillos and about 5 different types of chiles. My husband has made some delicious salsa verde and green chile sauce, and we’ve discovered some great new recipes that use them both. (Green chile enchiladas and a steak with cream chile sauce being the top two favorites, I think.) We don’t have as much luck with our pears, apples, and plums though. The trees definitely bear a lot of fruit, but birds or bugs or our dogs get to them before we do, or they don’t ripen enough. But that’s okay. I’m more than happy with the boysenberries, tomatillos, and chiles.

5. My last high five for the week is for the people who put this video together. Have you seen this? It’s The Office meets Broadway meets Election 2008. Impressive to have pulled something like this together. Hope you enjoy:

A recent headline on my Yahoo! homepage:

Poll: Nearly Half Hearing Too Much About Obama.